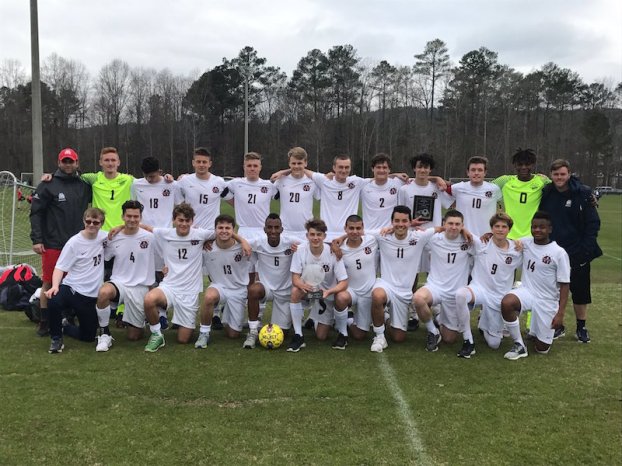 The Eagles faced three top opponents in the state on their way to the championship as they went up against No. 6 Hoover, No. 13 Prattville and No. 14 Sparkman in the Platinum Division of the tournament.

The tournament bases scoring on a 10-point system instead of using a championship game to determine a champion and with two wins, one draw and a total of five goals in their three games, Oak Mountain was crowned as the champion.

In Game one of the tournament on Friday, Feb. 17, Oak Mountain squared off against a tough 7A foe, the Hoover Buccaneers. For much of the match, it looked as if the two teams’ opening game would end in a 0-0 draw, but thanks to a late goal, the Eagles were able to come out on top 1-0.

Kennedy Davis came through for Oak Mountain as he found the back of the net with about three minutes left in the game. That goal by Davis ended up being a difference maker in the tournament even though the Eagles didn’t know it yet. Had the game ended in a draw or had Hoover won, they most likely would have switched places and Hoover would’ve won the championship.

Game two of the tournament matched the Eagles against Prattville shortly after their win over Hoover. Whether it was seeing that goal from Davis late in the first match or the team just started clicking, game two was much more entertaining from an offensive standpoint as Oak Mountain finally started finding some goals.

Clay Holstad got the Eagles on the board early putting them up 1-0, which was followed not too long after by another goal from Davis. Prattville couldn’t find any offense in the first half as Oak Mountain took a 2-0 lead into the break.

Early in the second period, Prattville found the net to cut the lead to 2-1 and make things interesting. The Eagles, however, were just too much on offense as Prattville couldn’t find a way to stop them. John Long and Jackson Murphy added two more unanswered goals for Oak Mountain as they went on to win by the final of 4-1 and move to 2-0 in the tournament.

During day two of the tournament on Saturday, Feb. 18, the Eagles squared off against Sparkman at 10 a.m. Oak Mountain tended to control the tempo throughout and got a lot of good looks in the game, but failed to convert any of them into goals. Luckily their defense held strong enough and kept Sparkman from finding the net as well ending the game in a 0-0 tie to give the Eagles a 2-0-1 record in the tournament and based on the 10-point scale enough points for the championship with 19 points.

By GRAHAM BROOKS / Staff Writer MONTGOMERY–The Westminster Lady Knights have once again made history in the 2016-17 basketball season.... read more