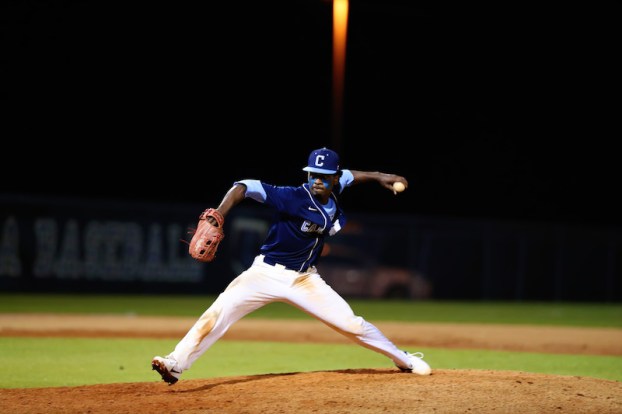 Kevin Dowdell threw a no hitter against the Montevallo Bulldogs on Feb. 23, going shortened five innings with nine strikeouts in an 11-1 win. (For the Reporter/Cari Dean)

CALERA – The Calera Eagles came into the 2017 baseball season as one of the more loaded baseball teams across Shelby County, but a heartbreaking opening day 3-2 loss to Chelsea on Monday, Feb. 20, wasn’t quite what they had in mind.

It didn’t take them long, however, to rebound as they took down Homewood 8-5 a day later to even their record at 1-1, and then on Thursday, Feb. 23, the Eagles showed why they are considered a favorite in the 5A ranks.

Calera brings to the table one of the best pitching staffs in the state, and in their matchup with Montevallo, Kevin Dowdell took to the mound throwing a five inning no-hitter as the Eagles came out on top 11-1.

Dowdell’s performance included nine strikeouts to just two walks and one unearned run. He threw 72 pitches on the night, 47 of which went for a strike.

From the first inning of the game, Dowdell made it known he would be throwing lights out as he struck out the side in just 11 pitches to start things off. In the bottom half of the inning, Dowdell got all of the offensive help he needed, including some from himself.

After a strikeout and a walk to start the inning, he doubled to center field scoring Austin McKinney all the way from first base. After a fly out and a walk, Calera put together three straight singles to put two more runs on the board and load the bases. A walk by Tyler Ferguson scored another run before Will Glasscock singled to drive in their fifth and final run of the inning to take a 5-0 lead after one.

Nothing was doing for either team in the second inning, but in the top half of the third, Montevallo tried to make a little bit of a move.

An error and a walk put runners on first and second with no outs when Montevallo laid down a sacrifice bunt to move both runners into scoring position with just one out. Dowdell was able to strike out the next batter he faced for the second out of the inning.

One batter later, on a 2-1 count, Montevallo was able to score on a passed ball to put their first run of the game on the board. Dowdell was able to get the next batter to hit a grounder back to him, which he easily tossed to Tyler O’Clair at first base for the third out of the inning to limit the damage to just one run and keep the no-no intact.

Neither team got anything going over the third or fourth inning, but after putting down the Bulldogs in order in the top of the fifth inning, Calera came out with hot bats in the bottom half.

Jacob Smith led things off with a double to left field on a six pitch at bat, which was immediately followed by triple from Christian Hall to score Smith. After a single, a walk and a double over the next four at bats, the Eagles had broken things open at 8-1 when Dowdell came back to the plate and nailed a line drive triple to left field to score two more runs and make it 10-1. After Dowdell crossed the plate to make it 11-1, Calera was able to pick up a run rule win in just five innings.

Dowdell’s no-hitter was impressive enough, but he also helped himself out on the offensive side of things going 2-4 at the plate with three RBIs and scoring twice. Hall also had a nice day going 2-2 with two RBIs, two runs scored and a walk. Quin Darius Crew and Jacob Smith both had multiple hit days as well as each went 2-3.