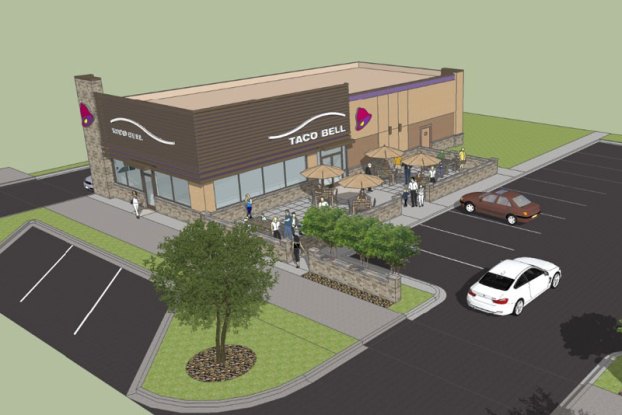 The proposed design of the Taco Bell would include walls in front of the parking lot and an outdoors dining patio. (Contributed)

Montevallo might soon have a Taco Bell on Main Street.

The proposal for the new restaurant located it as Main Street Tavern’s neighbor, replacing the two buildings between the tavern and Doodles Campus Store. The tenants will have 60 days notice if the site plans are approved.

The new building will follow design guidelines for the renovation project on Main Street. The design will promote visual unity by having walls along the sidewalk and including “local flares,” according to Montevallo Main Street marketing director Sarah Hogan.

“It is specifically a Montevallo Taco Bell,” Hogan said.

The students of University of Montevallo had started a petition on Change.org to get Taco Bell’s attention in hopes that it would open a franchise near the university. The company responded to the 353 supporters who wanted to “Bring Taco Bell to the Vallo” by planning a 63 seat restaurant with a large patio, a feature praised by Hogan as being in line with Montevallo’s spirit of community.

Tacala, Taco Bell’s franchise operator, hopes to obtain approval for its plans and open the restaurant by late summer 2017.

“We are looking forward to being a part of this community,” Tacala Vice President of Development Michael Border said in a press release. “We feel fortunate to be involved in the city’s efforts to improve the aesthetics of the downtown area.”

According to Hogan, the renovations on Main Street were part of the community’s appeal to the franchise. The construction has only mildly inconvenienced storeowners so far, she reported, and most if not all businesses will remain open throughout the construction process.

City officials said they were happy to see the continued growth of Montevallo, even during the renovation of its downtown area.