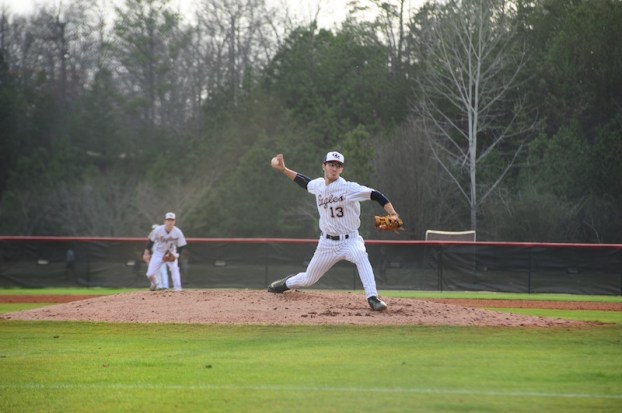 NORTH SHELBY – It took just 78 pitches for Joseph Hartsfield to register a complete game win over Clay Chalkville on Tuesday, Feb. 28. He gave up just two unearned runs and two hits while striking out an incredible 15 batters in the Eagles 4-2 win.

After a quiet first couple of innings, Oak Mountain finally put the first run on the board in the bottom of the third without even registering a hit. Ethan Holsembeck reached on a dropped third strike to start the inning off. A sacrifice bunt moved him to second and a passed ball during the next at bat moved him to third.

John McDonald hit one deep enough to left field for a sac fly that allowed Holsembeck to cross the plate to put the Eagles up 1-0 through three innings.

The Cougars answered in the top of the fourth inning with a leadoff single. After a stolen base and a sacrifice bunt that led to an error, Clay Chalkville was able to tie the game at one apiece. The Cougars scored one more run in the inning to take a 2-1 lead thanks to a wild pitch from Hartsfield.

Logan Sheaffer helped Oak Mountain answer with a double in the second at bat of the bottom half of the inning. After the Clay Chalkville pitcher hit the next batter and walked the next two after that, the Eagles had platted another run to tie it at 2-2 and still had the bases loaded with just one out.

Hartsfield came to the plate and on the sixth pitch of the at bat popped a ball to the first baseman that wasn’t caught allowing two more runs to come across the plate giving himself some help as Oak Mountain took a 4-2 lead.

After his strong at bat that gave the team the lead, Hartsfield wasn’t going to let the game slip away for a loss. He came out and struck out the side in the top of the fifth and seventh inning, while giving up just one baserunner due to an error in the top of the sixth.

His day on the mound was strong, but he also went 1-2 with two RBIs at the plate to pace the Eagles. Spencer Hughes had a nice day as well going 2-3 with a double. Five different Oak Mountain players had a hit on the day, while Clay Chalkville only picked up two hits from two different batters.

The Eagles moved to 4-3 on the season with the win as they look to get on the right track.