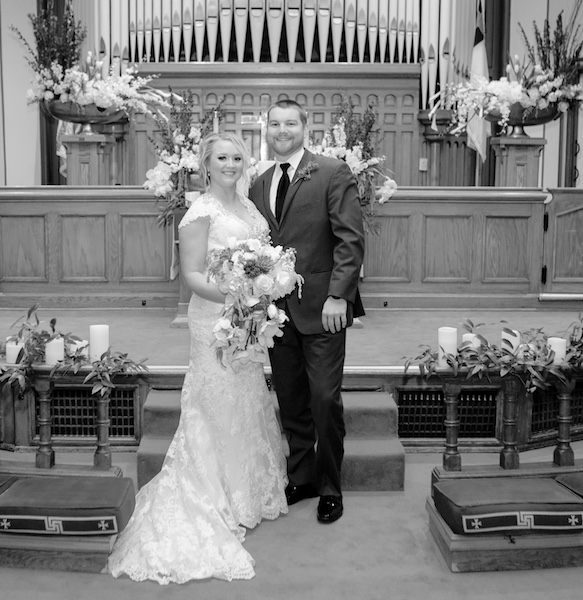 Mr. J. Ross Railey, father of the bride, was the floral designer for the wedding. He used white hydrangeas, arctic white roses, hanging agapanthus, Calla lily, rosemary and white Dendrobium orchids in various arrangements inside and outside the church. Above the church doors was a cascade of, and the doors were adorned with, wreaths made of rustic cut tree saplings. The pews were embellished with arctic white roses tied with white ribbons. The altar was adorned with a mixture of all the artic white roses, hanging agapanthus, Calla lily and white orchids with pillar candles in cascading Jackson Vine, and the communion table held the unity candle.

The nuptial music was presented by Jacob Frank, violin; Heather Sasser, flute; Ruth Moyers, pianist; and Karen Moore, vocalist. Vocal selections included, “This Is the Day,” “I Will Be Here” and “The Lord’s Prayer.” The grandmothers were seated to “The Prayer.”

The bride, given in marriage by her father, wore an Allure Bridal Gown of Sheath point d’espirit with Venice Schiffli candlelight lace. The sweetheart neckline was heavily beaded, while the bodice was covered with Venice and Schiffli lace, encrusted with sequins featuring a natural waistline. The gown had a keyhole back edged with scalloped beadwork. The gown had cap sleeves. The long flowing fit and flare skirt was bordered with Venice lace, extending into a cathedral length train. The bride’s veil was two-tier matching Schiffli lace extending beyond cathedral length train of the gown. The bride carried a cascading bouquet of white roses, hydrangea and Cymbidium orchids.

Nora Childers and Anna Kate Railey, cousins of the bride, served as attendants to the guest book and wedding programs.

The reception was held at Mallard Stables in Point Mallard Decatur, where the bride’s parents entertained with a festive reception of dinner and dancing.

The stables were beautifully decorated with flowers that complimented the wedding ceremony. The entrance was decorated with large lanterns with pillar candles and Jackson vine atop old wooden barrels. The guest tables draped with white floor-length tablecloths and centered with floral and candle arrangements atop of mirrors.

The groom’s cake was a three-tier peach pound cake with buttercream icing, topped with an anchor made by Lacey Baker Ellison of Thorsby. The groom’s favorite dessert is peanut butter balls; these were made for his table by Deborah Robinson of Bopie’s Sweets and Treats, Thorsby.

The energetic Group 6 Band entertained the guests in the stables under the lights where the guests, bride and groom danced the night away to their favorite tunes.

After honeymooning to Salt Lake City, Utah, the newly married couple is residing in Pensacola, Florida, where the groom serves in the United States Navy.