“The most important message to relay to your parents is that we’re returning from Tuscaloosa after 6 p.m. due to the Alabama Scholastic Press Association (ASPA) Awards ceremony. You will need a ride home when we return Friday evening,” I reminded my students as I distributed permission slips.

“This trip is so worth it,” one of the legacies promised. “State Convention is a lot bigger than the regional trip in September.” 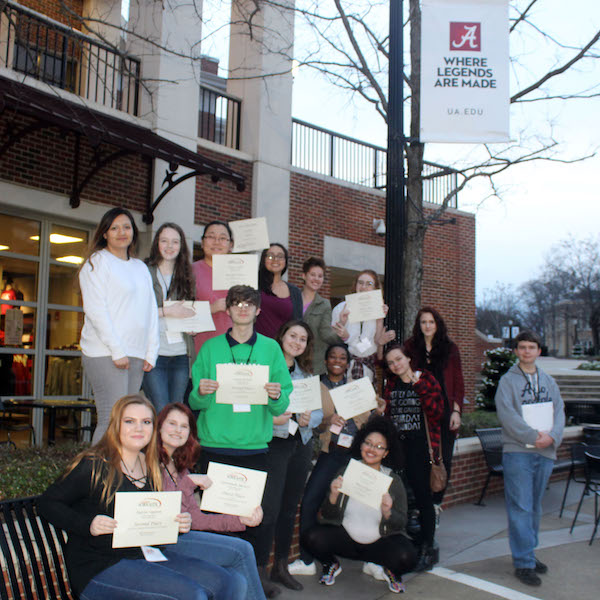 PHS Communication and Media Arts Academy students show off their many Literary Magazine and individual student awards as they reflect on a recent day of inspiring training at Alabama Scholastic Press Association State Convention. (Contributed)

There are at least four legacies on the magazine staff this year. Legacies have older siblings who went through PHS Literary Magazine class. Legacies know the trauma of meeting deadline and producing the magazine. They also know the thrill of winning awards. The rest of the staff experienced the thrills at ASPA State last Friday.

“There was a perfect balance of instruction to hands-on work,” said sophomore staffer Kathleen Kelley as she spoke about the day’s favor session among Lit Mag staffers titled, “The Cover Art Collage.”

“I felt my creative gears grind,” senior magazine staffer Kat Owens said. “Creating something unique, while collaborating with the staff, was engaging and fun.”

Owens and several staffers were excited to share their masterpiece inspiring spontaneous staff collaboration about possibilities for adapting a magazine cover already underway.

“The trip to UA inspired ideas about improving and working together as a team,” said staffer Louie Smith.

The PHS Lit Mag brought home a Superior Award for the magazine and several individual awards including Morgan Harris’s Poetry Spread Design first place in state. The staff also brought back an array of ideas for their magazine.

The 2017 PHS Lit Mag promises to be a masterpiece of teamwork and collaboration showcasing PHS artistry.