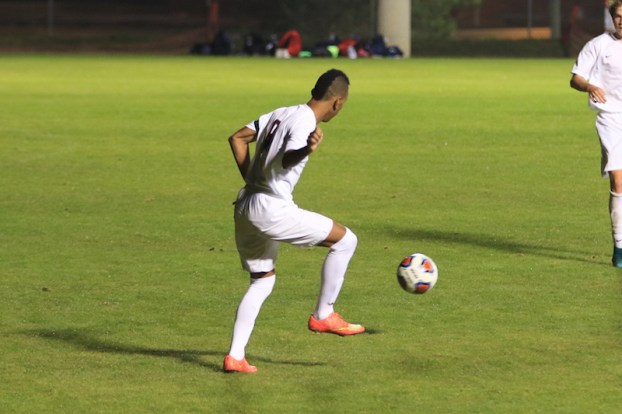 Oak Mountain defeated Pelham 5-1 in a matchup of ranked county soccer teams on Thursday, March 2. (For the Reporter/Dawn Harrison)

PELHAM – Both the Oak Mountain and Pelham boys’ soccer teams had established themselves as contenders early in the 2017 soccer season heading into their matchup with each other on Thursday, March 2.

The Eagles came into the game as the No. 1 team in Class 7A behind a record of 4-0-2, while the Panthers, the No. 3 team in Class 6A, had been having success of their own. Pelham had gotten off to a 7-1-1 start on the season and has established themselves as one of the favorites in the 6A division.

While they both look like strong teams, only one could walk out of Thursday’s matchup with a win, and thanks to two goals from Victor Perez, Oak Mountain showed why they are looking to three-peat as state champions in 7A as they came out on top 5-1.

The first 14 minutes were a bit slow, but finally in the 15th minute of the game, Clay Holstad picked up a beautiful assist and found Jackson Murphy who headed it to the back of the net for the game’s first goal to put the Eagles up 1-0.

Eight minutes later the next opportunity presented itself, this time in the form of a direct kick from Pelham. The Panthers got a chance from just outside the box, but the ball narrowly sailed over the top of the goal as they failed tie up the score.

A few minutes later, the Panthers got another great look off of a broken up corner play and this time they capitalized as Douglas Herrera Diaz struck the ball perfectly passed the goaltender to tie things up with less than two minutes left before the half.

The Eagles felt like they had played better than a 1-1 tie in the first half and decided they wanted the lead. Right before the halftime break they were able to string together some passes for the first time in the game, which led to Victor Perez sneaking one by Pelham’s goalie to give Oak Mountain a 2-1 lead at the break.

This really seemed to swing momentum as the Eagles came out strong in the second half scoring seven minutes into the quarter. Murphy sent a crossing kick to Perez who nailed it home for his second goal of the night to put his squad up 3-1.

Both defenses settled in as neither team posed much of a scoring threat over the next 15 minutes of the match. Holstad and Kennedy Davis, however, have been a dynamic scoring duo throughout the early part of the season and with 15 minutes to play Holstad found Davis yet again for a header to extend the Eagles’ lead to 4-1.

A three goal deficit in 15 minutes is a tough hurdle to jump, and when Patrick Guffey picked up his first career varsity goal shortly after, he sewed things up for Oak Mountain as they picked up the 5-1 win.

Perez picked up two goals in the win, while Davis added two assists on the night.

By ALEC ETHEREDGE | Sports Editor BIRMINGHAM – Heroics have become somewhat of the norm for the Spain Park girls’... read more