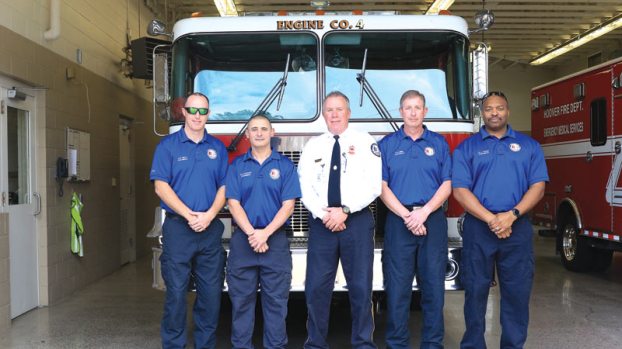 The Hoover Fire Department dates back to a time when many of the communities in the soon-to-be incorporated city of Hoover only had volunteer fire departments such as Riverchase, Patton Chapel and Bluff Park.

Many firemen within the communities also have an extensive background with the department. Capt. Charles Banks, for instance, has served the Hoover Fire Department for over 30 years.

“Firefighting and EMS got in my blood instantly after going to school to become an EMT while I was working at Hercules Power Plant,” Banks explains.

He continued school on his own at the University of Alabama and became a licensed paramedic in 1983 and was later hired by the Hoover Fire Department in 1986.

Banks started his service in Hoover at Station 5 in Bluff Park and worked in a number of other Hoover stations.

Banks was transferred again back “home” to Station 5 in Bluff Park where he continues to serve as station captain today.

Over the years, Banks has seen both the good and the bad, not unlike many of the firefighters who serve Hoover.

A prominent memory for the department and the city itself is the 1993 snow and ice storm.

“Me and many others worked at the fire station for five days straight,” Banks says. “Anyone who has lived in Bluff Park for any length of time knows the area is the first to freeze and last to thaw. The weather always seems to be a little more extreme on top of the mountain and that night was no different. We knew snow was coming, but we didn’t know it was going to be as big as it turned out.”

Banks was working out of Station 5 and the Hoover Fire Department had prepared all of their equipment and apparatus for the event as well as securing extra firemen and EMTs to be ready. As night fell, the snow began to fall, and fall, and fall.

One of the first calls the fire department was dispatched to was an “unknown medical” call on Shades Crest Road.

“When the bay doors were lifted at the station the snow was over 3 feet deep,” he says. “By the time we reached Park Avenue, snow had pushed completely over the windshield and broke one of the wiper blades.”

Finding the residence on Shades Crest Road was very difficult for the team because the snow was already higher than the mailboxes.

“We could navigate by looking at the telephone poles and trying to stay between them,” he says. “Every now and then we could see a hump in the snow. It would be a mail box that wasn’t completely buried.

“Finally, 30 minutes later, we found the house,” he continues. “Wading through snow that was from 3 to 5 feet deep, we reached the door. An elderly lady opened it and said, ‘It’s good to see you boys.’ Our reply was ‘Are you OK?’ She said she was, and she had no power and what she would really like is a good hot cup of coffee. My partner and I looked at each other. We asked if she had water and a way to keep warm, and she did. We told her we would have to work on the coffee, we were without power also. She was OK, and we were thankful. It took more than an hour to get back to the station.”

As the sun came up that March morning and people began to explore the outside, the calls began to pour in. Birmingham alone had over 12 inches of snow.

“I have never before or since splinted so many femur fractures,” Banks says. “We ran out of traction splints in the first three hours of daylight and had to resort in makeshift splinting with whatever we could find. People were trying to sled down steep streets in the neighborhood only to hit brick mailboxes, cars, poles and ditches along the sides of the street. There were a lot of femur fractures and, in a couple of cases, serious internal injuries. There were so many calls that day we were actually finishing up from one call and responding to the next one. Our skills as a paramedic were tested to the max during this event.”

Being a firefighter or paramedic comes with a great deal of responsibility. They constantly go into situations where there is chaos, anxiety and fear on the part of the occupants or victims. “There are those times when, despite our best efforts, the outcome is sad and you have to learn to cope with it,” Banks says. “There are also times we arrive and bring about a good ending to a medical emergency, or extinguish a ravaging fire, and that feels so good to help people and help our community.”

Being part of the community does not just mean protecting it but also celebrating the holidays as part of a tradition Banks helped revamp.

“I don’t know the exact year we actually started calling it a Santa Run, but we’ve always had something to do with Santa traveling all over Hoover to see the kids on Christmas Eve,” he says.

In years past, Santa would make his annual ride through Hoover sitting on top of the truck, but seatbelts became an issue. No one wants to see Santa topple off the fire truck and not be able to make it down the chimney in a single bound.

Santa then took his seat inside the cab and that continued for several years.

“That was a bummer because the public could not see him very well,” Banks continues.

And what’s the point of Santa making his way to Hoover from the North Pole if the people can’t see his rosy red cheeks in the fire truck? Then came an idea. Chief John Wingate commissioned Banks to build sleighs for all of the trucks.

“Each sleigh had to be fastened to the apparatus in such a way as to withstand a low speed wreck, and they had to have a seat with a seatbelt and lights to focus on Santa,” he says.

“This was quite a feat,” Banks says. “We set up shop in the basement – welders, grinders, saws, metal shop and woodworking shop as well as a paint shop.”

They completed 11 fully rigged, painted and wired Santa sleighs in time for Christmas, and had a lot of fun doing it. Santa got to ride in his new, bright red sleigh for Christmas Eve 2015.

From a logistics standpoint, the sleighs had to have the ability to be removed quickly in the event the engine was diverted to a call and needed to gain access to the hose bed.

Thankfully, everyone was OK on the first call, and the second call was canceled. Also, the 2016 Santa Run went high tech in Bluff Park. Residents were able to follow Santa via Facebook Live thanks to Bluffparkal.org (live from the cab as a ride-along guest) and Bluff Park Drone (live from the air).

The live feed ran for the entirety of the five-hour Santa Run (excepting service calls). Even past residents tuned in to the live feed to watch the tradition they had enjoyed and missed.

Bluff Park viewers were able to see where the truck was and how close Santa was to reaching their street. Many commented during the feed how much they appreciate and love that the Hoover Fire Department continues this tradition each year, not only in Bluff Park but all of Hoover.

Christmas Eve is just as enjoyable for the firemen with Santa as it is for the community. They laugh, talk and wave to the people, but it is also a work night as all engines across Hoover are on duty.

Returning from one of the calls, Santa had to dismount from his lofty sleigh and ride in the cab to return to the Santa Run schedule. Once back in Bluff Park, the Christmas music was going on the radio, and Santa may or may not have been dancing a bit in the cab before making his way back to his sleigh, waving and wishing everyone a Merry Christmas.

The Engine 5 team is in constant communication with Santa via a radio to warn him of low-hanging branches and alerting him to what side of the truck people are on. On one street, a young child had a letter ready to give Santa so the truck slowed down and the delivery was accomplished. This trip brings a smile to everyone.

Banks says that is the life of a fireman.

“I have had highs and lows throughout my career, and I can say the highs outnumber the lows,” he says. “Each day is a challenge and I’m still excited to come to work. I think one of the things that attracts me to this job, other than having a job where you actually get paid to help people and what a great feeling that is, is that no two days are ever the same. Just when you might say that you have seen it all, something happens that’s so bizarre, that you couldn’t have even dreamed it up.”