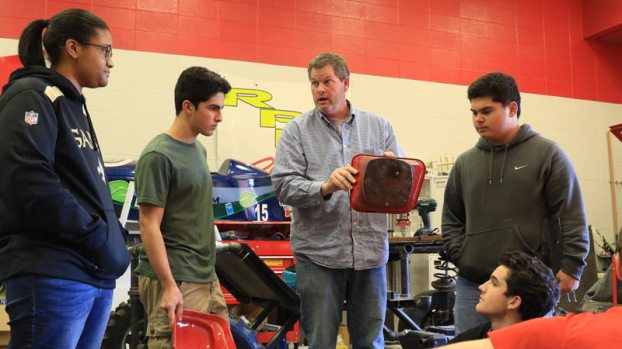 Teacher Brian Copes nominated as Life Changer of the Year

Thompson High School engineering academy teacher Brian Copes has been nominated for the 2016-2017 national LifeChanger of the Year award.

“This is very exciting,” Copes said about his nomination.

Sponsored by the National Life Group Foundation, the national LifeChanger of the Year program recognizes and rewards the very best K-12 public and private school educators and employees across the United States who are making a difference in the lives of students by exemplifying excellence, positive influence and leadership, according to a press release about the LifeChanger program.

Copes, who has been a teacher for 21 years, was nominated by Cena Davis.

He previously taught at Calera High School, where in 2008, his eighth grade class won a collegiate-level engineering competition for building basic utility vehicles capable of transporting goods and services in underdeveloped nations abroad.

“I had a lot of experiences growing up where I had the opportunity to travel,” Copes said. “I have had the pleasure of visiting six continents. I went to Liberia, Africa when I was a teenager and saw people lived in mud huts, but they were such a happy group of people. That experience really opened my eyes to the needs of the world.”

Copes has led four teams of students and teachers to the jungles of Honduras, where they have not only delivered the basic utility vehicles, but have fitted 20 amputees with student created prosthetic legs, mass-producible at $40 each, according to the release.

In 2014, his students also constructed a hydroelectric power plant to generate electricity for a rural medical clinic, and to install solar panels and build a basic utility vehicle that serves as a school bus.

“I think a lot of times we can be really focused on where we live whether it is Calera, or Alabaster, or Alabama, and most people, especially youth, don’t really know the world around them,” Copes said. “They see people living in a mud hut from a television program, or they think that something like that happened a long time ago. I really enjoy being able to show my students the world around them, and I have seen through that process their eyes are really opened up and they take the focus off of themselves and put it onto others. That is really where true learning takes place.

In 2013-2014, Copes led a group of educators to Honduras to establish a sister school partnership in Jutiapa, where wages average $2.50 per day.

Copes raised the necessary funds to add two rooms onto the Cefalu School in Honduras, allowing the school to offer middle and high school level classes, according to the release.

There are currently 115 students who attend the school.

In 2014, Copes and seven students traveled back to Jutiapa to install solar panel and build a basic utility vehicle that serves as a school bus.

This summer, Copes plans to establish another sister school in Olvidado, which currently does not have a high school. His students’ plan to build a small two room cement block building to be used for Olvidado’s school.

“Not only is Copes a LifeChanger, but he is teaching his students and colleagues how to be LifeChangers, as well.” Davis said in the release. “We are proud to have recruited him and worked with him, but most importantly, they are proud to call him a friend.”

Copes was also recently recognized by the Varkley Foundation’s Global Teacher Award as one of the top 50 Teachers in the World.

Each LifeChanger winner will receive a cash award that is split between the individual winner and their school, according to the release.

The national Grand Prize award is $10,000. Winners are announced via surprise award ceremonies held at their schools. The top five winners will also be honored at a national awards ceremony in Naples, Fla. Winners will be announced in Spring 2017.