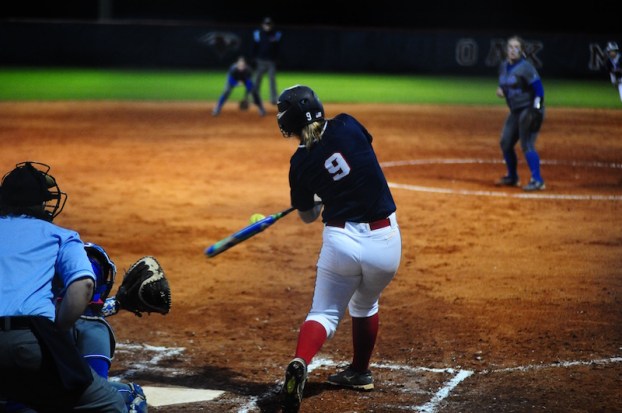 Cassady Greenwood swings away as the ball heads right for the sweet spot of the bat. She had a home run and two RBIs in the Eagles’ first area win of the season. (Reporter photo/Alec Etheredge)

NORTH SHELBY – It was a slow start for the Oak Mountain Eagles’ softball team as they kicked off the 2017 season with a 1-4 record through their first five games.

On Monday, March 6, however, they picked up their seventh win in their past eight games and a win in their first area game of the season as they took down Huffman 17-0 at Oak Mountain High School.

After the 1-4 start, the Eagles reeled off six consecutive wins and made an appearance in the semifinals of the Jag Classic before falling to defending 7A state champion Sparkman.

They rebounded from that tough loss with a nice dominant win in their first area game thanks to 12 errors by the Vikings’ defense and now sit at 8-5 overall and 1-0 in area play.

Abby Jones pitched a solid game in the circle, going all three innings allowing just one hit while striking out seven and giving up no walks or runs.

After Jones put down the Vikings in order to start the game, the Eagles came to the plate ready to roll. For some reason, Huffman’s defense didn’t come ready and looked a little panicked early on.

Oak Mountain’s first two batters, Maddie Katona and Abbi Brown, reached base on fielding errors. After a groundout advanced both runners a base, Cassady Greenwood came to the plate and hammered a ball over the right field wall to put the Eagles up 3-0.

Oak Mountain was able to put four more runs on the board with just one hit thanks to three walks, two errors and a passed ball over the next seven batters. With two outs in the inning and two runners in scoring position, O’Neil Roberson powered a line drive to left field that got down for a double, scoring their eighth and ninth runs of the inning as they took a 9-0 lead after one. The Eagles came close to batting through the order twice.

In the bottom of the second inning, before the first out was recorded, Huffman allowed four errors, a runner to get on board due to a dropped third strike, a single and back-to-back doubles that led to Oak Mountain putting up seven more runs to take a 16-0 lead. One more single in the inning by Savannah Garrett drove in their 17th and final run.

Just as the game started, Jones forced a 1-2-3 inning in the top of the third to put the game to rest.

Roberson had a monster game at the plate going 2-3 with three RBIs on two doubles. Greenwood also had a nice game thanks in large part to her home run as she went 1-2 with two RBIs and a run scored. In the crazy stat of the game, Jenna Galloway had two RBIs without recording a hit thanks to two walks that both drove in a run.

By GRAHAM BROOKS / Staff Writer The Helena Huskies baseball team had another solid week of games the week of... read more