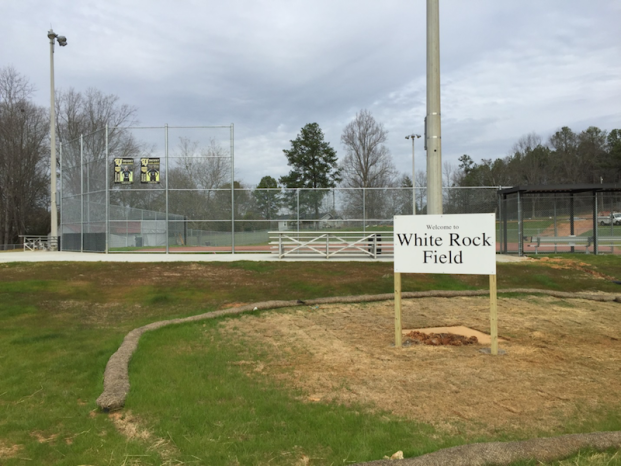 Vincent played their first game on the newly built White Rock Field on Monday, March 6, and picked up a 12-11 win over Winterboro to move to 3-3 on the season. (Contributed)

VINCENT – It’s been an up and down first six games for the Vincent Yellow Jackets’ 2017 softball team. After losing three straight games to start the season 1-3, Vincent has responded with two consecutive victories, including their latest win over Winterboro on Monday, March 6.

The Yellow Jackets had a little more motivation as the night marked the first game to ever be played at their newly built White Rock Field.

“This is an exciting time for all who contributed to prepaing the field for play this softball season,” VMHS principal Dr. Michele Edwards said.

The field had been in the making for many years and was possible thanks to the collaborative effort of White Rock Quarries and Shelby County Schools.

“Many people deserve the thanks for the completion of our softball field,” Edwards said. “It would not have been possible without the support of White Rock Quarries, the VMHS Booster Club, Mayor McAllister, the City of Vincent, parents, players, Shelby County Schools, and many others in our community that have put effort into getting this facility ready for our girls.  Thank you to all who have been involved.”

As for the game, you couldn’t have asked for a more thrilling start for the new home of the Yellow Jackets.

Going into the bottom of the third for their final chance at the plate, Vincent trailed 11-7 and was going to need some kind of magical ending for the win.

Courtney Waldrop and Daysia Robertson started the inning with a single and a walk. Waldrop eventually moved to second on a passed ball, but was caught stealing third, which left Robertson at first with one out.

Kate McKeller singled on a ground ball to second base, which put two runners back on and one in scoring position. Sam Walker came to the plate next and was hit by a pitch on the second pitch of the at bat to load the bases.

Winterboro’s pitching collapsed after this as Robertson and McKeller both scored on wild pitches in the same at bat, which was followed by two more hit batters to drive in a third run in the inning to make the score 11-10 as the Yellow Jackets all of a sudden only trailed by one.

Adrianna Webster struck out in the next at bat to tally the second out of the inning making you think the Bulldogs had taken back control of their pitching.

Bama Wallace followed and it was quickly determined the pitching was not under control. On the first pitch of the at bat, Madison Allred was able to cross the plate thanks to another wild pitch and three pitches later, Lexi Adair sprinted home after another wild pitch for the game-winning run as Vincent was able to walk away with a 12-11 win.

The two teams combined for 23 runs, but only combined for eight hits during the game. The Yellow Jackets struggled defensively accumulating six errors to the Bulldogs’ one, but the amount of passed balls by Winterboro were just too much to overcome.

McKeller led Vincent at the plate going 2-2 with one walk, one RBI and one run scored. McKeller got the start in the circle as well and went all three innings allowing 11 runs, only three of which were earned, four walks and three hits while striking out three. Mikia Lathon also had a nice game going 1-1 with an RBI and one run scored. With the win, the Yellow Jackets moved to 3-3 on the season.