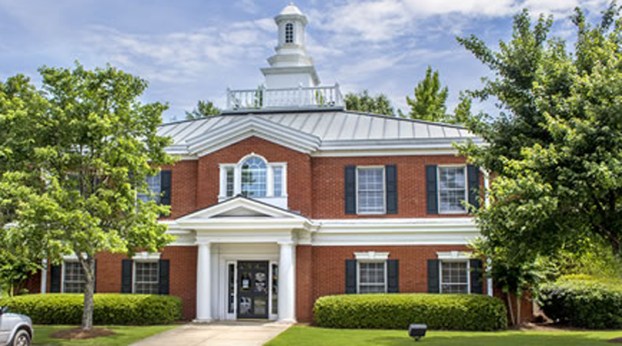 The city of Chelsea recently contracted with Renasant Bank to purchase a building on U.S. Route 280 to house the Chelsea Public Library. (Contributed/Charles Richard Photography)

CHELSEA- The city of Chelsea unanimously voted to purchase a building on U.S. Route 280 from Renasant Bank at a regularly scheduled city council meeting on Tuesday, March 7. According to Mayor Tony Picklesimer, the building will be used to house the Chelsea Public Library.

“I’ve always thought it was a gorgeous building, and it would be a really good place for our library,” Picklesimer said. “At the old building, we’re out of room, and we’re having to limit the number of books that we buy. We definitely needed more space.”

Librarian Dana Polk said the new building is about three times the size of their current location on Weldon Drive, and the increase in space will allow the library to keep all of their books in the same location and allow more new books to circulate.

“When we first moved into our location at the house, we were actually already running out of room,” Polk said. “With libraries, we’re always weeding through books and looking at their conditions. Currently we have some of our collection in offsite storage. At the new building, we won’t have to resort to that for a long time, if ever.”

With the new building, Polk said the library will have more opportunities to host events and hold reading programs.

“I’ve been thinking about having a makerspace for the kids. Story time is going to have a designated space, and I think there is a small room that can be used for smaller programs,” Polk said. “Our summer reading program won’t be held there the first year, but hopefully on the second year.”

Before his mayoral campaign in the fall of 2016, Picklesimer said he had the idea to purchase the building, but wasn’t sure if the idea would ever become a reality.

“I first started thinking about it in the spring of last year. The building had been on the market for a short period of time, but it really didn’t seem like it was possible at first,” Picklesimer said.

According to Picklesimer, it took several weeks of planning and negotiation to finalize the deal.

“I talked to the council, and actually went to Renasant Bank and made them an offer on the building. We negotiated the offer for several weeks, and we were able to get to a number that we felt like we could afford,” Picklesimer said.

Picklesimer said the purchase is an excellent investment for the city of Chelsea, because it is a marketable asset.

“We purchased a building right in the heart of our commercial district. Someday, years from now, another mayor and campus will decide to build a permanent library. When that happens, we will have this beautiful building to repurpose for another city use or to sell,” Picklesimer said. “It will be gaining value as we use it.”

Picklesimer said the purchase of the building cost $895,000 while it was originally listed for $1.3 million. A start date for renovations has not currently been set, but Picklesimer estimated renovations should take 90 to 100 days to complete.

“Getting the contract and actually purchasing the building was the first step,” Picklesimer said.

Both Polk and Picklesimer confirmed that the building served as the city’s first City Hall, and the library was housed in the boardroom, before it was bought by Renasant Bank.

PROFILE: Johnson lives through hardships to become symbol of Pelham