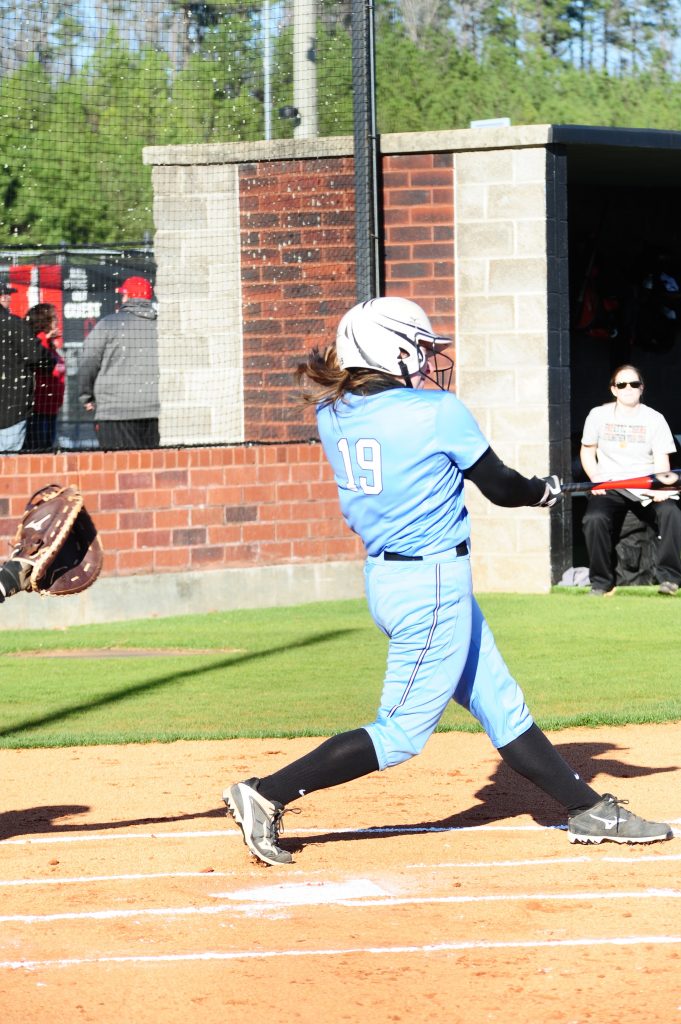 Caroline Parker, pictured above, had a monster game going 3-5 with four RBIs as she helped lead Spain Park to a 13-7 win in their first area game of the year. (Reporter photo/Alec Etheredge)

HOOVER – A strong start for the Spain Park softball team got even stronger as the Jags took down Mountain Brook 13-7 on the road Wednesday, March 8, behind a profound 18 hits to pick up their first area win and remain perfect on the season.

Coming into the game it was clear the Jaguars had the advantage having won 13 consecutive games compared to the Spartans’ 1-9 record over their first 10 games.

From the very first at bat, Spain Park (14-0, 1-0) made it known they had the confidence in their bats and that they were going to swing away. Maddie Majors led things off and in typical Majors fashion she started the game with a leadoff triple.

During Mary Katherine Tedder’s at bat two batters later, Majors came home due to an error by the catcher. Tedder ended up walking to give the Jags a baserunner with Caroline Parker coming to the plate, which is always dangerous for opponents and she made that known during this game.

Parker watched strike one and saw all she needed to see as she doubled to left field on the next pitch bringing home Tedder all the way from first to give SPHS a 2-0 lead, which they held at the end of the first inning.

Anabelle Widra got the start in the circle again and made her presence known as well. After walking the first batter she faced, she set down eight of the next nine batters she faced over her three innings pitched with a strikeout.

Spain Park didn’t threaten in the second, but came back in the top of the third with their strongest offensive inning of the game. Thanks to six hits, including four singles and two doubles, as well as an error and a walk, the Jags were able to put up seven runs in the inning to take a 9-0 lead.

In the top of the fourth, a double from Widra and a single from Bailey Bowers brought home two more runs to give them a commanding 11-0 lead.

Mountain Brook finally made their move in the bottom of the fourth thanks to two hit batters and two errors by Spain Park, which allowed the Spartans to put up five runs and tri the lead to 11-6.

Each team scored two more runs the rest of the way making no difference in the outcome, Spain Park put up runs in the top of the fifth and sixth, while Mountain Brook added a run in the bottom of the fifth and seventh to account for the 13-7 final.

Parker’s bat had to of been made of fire during the game as she led the Jaguars going 3-5 at the plate with four RBIs thanks to two doubles. Julianna Cross wasn’t too far behind with three RBIs after going 2-4 with a double and two runs scored.

A total of 10 different Spain Park players had a hit in the game, seven of which had a multi-hit game. Widra got the win in the circle after going three innings giving up just one run on no hits and striking out eight.