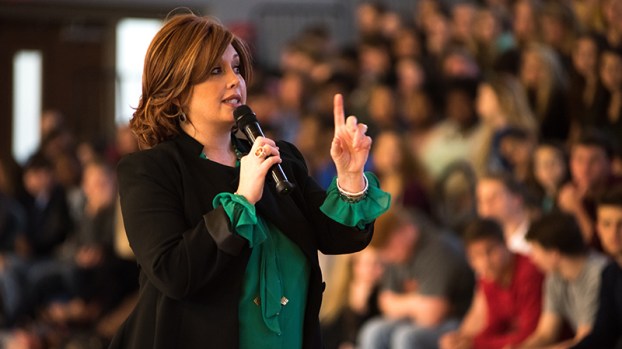 HELENA–Helena High School juniors and seniors have heard stories and been warned about the dangers of distracted driving, including drinking and texting when behind the wheel, but on Thursday, March 9, the students experienced a different kind of interactive activity to show the consequences.

Alvis made a makeshift courtroom on the gym floor and had several HHS students participate in a skit to show what would happen after a deadly distracted driving accident.

Also at the assembly were real life prosecuting and defense attorneys Randy Horton and Dan Alexander to participate in the skit.

In the skit, the distracted driver and accomplice were both attending a party during prom and had been drinking. The accomplice gave the driver her car keys and the result was a fatal crash that ended up killing their high school classmate.

The rest of the skit included police notifying the victim’s parents that their son had been killed by a drunk driver and then the consequences in court that followed after the crash.

Both the distracted driver and accomplice were sentenced to 25 years and 20 years in prison for their involvement in the fatal crash and that’s when it hit home for many of the students at the assembly.

Helena High School senior Sam Praytor played the role of the distracted driver involved in the fatal crash in the skit.

“I just think you need to think twice before you do anything and be careful,” Praytor said. “This really taught me that there are repercussions to your actions and how it will affect others lives.”

Alvis wanted the skit to be interactive and really hit home how dangerous distracted driving can be.

“They have heard power points and know the dangers, but the point of today was to show them how a situation would play out in court,” Alvis said. “We wanted to show them that their life will be over if they get behind the wheel of a car after drinking and kill somebody. I think it was good that they saw their own friends participate in the skit and that it doesn’t matter if they’re good kids or not. One bad decision can change their life.”

The Shelby County Drug Free Coalition will be traveling to other high schools in the county performing similar skits with a number of different speakers.