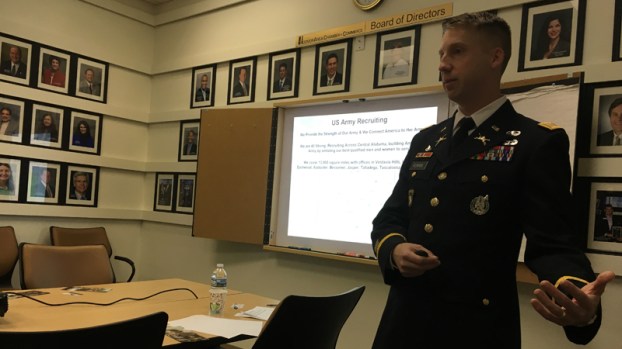 HOOVER – As the head of recruiting for Central Alabama, Commander Daniel Porris believes the U.S. Army can help young men and women—but the Army also has programs that can benefit businesses.

Porris, about one month into his job as head of Army recruiting for Central Alabama, spoke to the Hoover Area Chamber of Commerce’s Economic Development Committee on March 2.

Porris began his presentation by telling his “Army story,” which included being among the top of his high school class and attending Florida State University after being unmoved by a pitch from an Army recruiter.

Porris eventually joined the Army and served two tours of duty in Afghanistan.

He described the Army as the “front edge of diplomacy.”

“We are the insurance policy that guarantees American democracy,” Porris said.

The 2017 National Defense Authorization Act calls for the size of the Army to increase by about 16,000 people to a total of 476,000—raising the stakes for recruiters such as Porris, whose territory stretches from state line to state line east to west and covers about 13,000 square miles.

Porris oversees eight offices, including ones in Hoover and Alabaster.

“Our mission is to provide the strength to our Army,” he said and added that he expects to enlist about 450 recruits from his territory this fiscal year. “Your tax dollars pay my paycheck, and I am here to serve the community.”

Porris said the Army offers more than 150 career paths, from medical lab specialist to construction engineer, and high school graduates who enter the Army gain experience and skills that help them compete in the workforce.

“You’re just more mature; it’s a matter of fact,” he said. “We all need qualified, skilled labor. It can start in the Army.”

Porris highlighted the Army “Partnership for Youth Success” program, wherein the Army partners with companies, corporations and the public sector, which provide job interviews and potential employment to separating soldiers, cadets and officers.