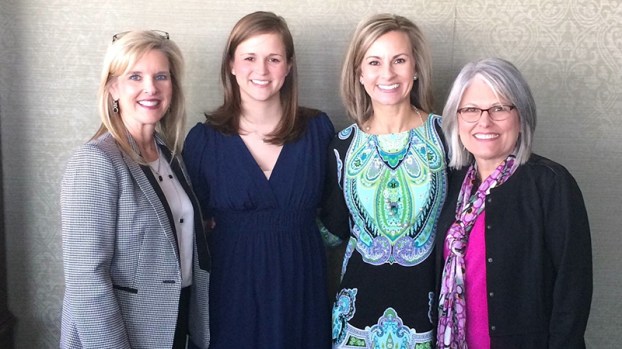 MONTGOMERY–Shelby County Schools recently had two teachers recognized for their hard work and dedication to the teaching profession.

Oak Mountain Elementary School teacher Jennifer Northrup and Helena Intermediate School math teacher Natalie Landrum were recognized as finalists for the Presidential Awards for Excellence in Mathematics and Science Teaching at the March 9, board meeting in Montgomery.

Northrup and Landrum were among eight nominees in the state as both were nominated as outstanding math instructors.

The Presidential Award for Excellence in Mathematics and Science Teaching was established by Congress in 1983 and is the highest recognition that a K-12 mathematics or science teacher may receive for outstanding teaching in the United States.

Landrum has been a teacher at Helena Intermediate for 15 years.

“It really was an honor to be nominated and I didn’t realize at the beginning what I was getting into,” Landrum said. “Principal Paiml nominated me last year and submitted an application, and then last summer I looked at what was involved and it was a big deal. The winner goes to Washington and wins $10,000 and it puts your foot in the door to be a spokesperson for math or science in our state. It was a really big honor to be chosen from our school because we have so many good math teachers here and we all work together all the time.”

Teachers are nominated from each of the 50 states and if chosen as a recipient for the award, the winner will receive a certificate signed by the President of the United States, a paid trip to Washington, D.C., a $10,000 award from the National Science Foundation and an opportunity to build partnerships from colleagues from across the nation.

“I really like teaching fourth grade fractions because it was something I struggled with as kid,” Landrum said. “I enjoy it because I’ve learned so many ways to teach it so they can understand and grasp it. That’s something I missed when I was younger and I think it gives them confidence when they learn fractions. When it comes through and they figure it out they can apply it. If you go into middle school and high school math with confidence it makes a big difference.”

For more information on the award, visit Paemst.org.