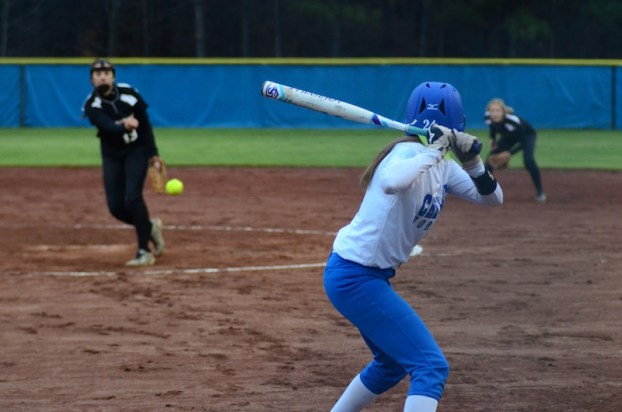 Lexi Serio waits for the pitch, which she drove for one of her two singles in the game. She went 2-3 with two RBIs, two walks and two runs scored. (Reporter photo/Alec Etheredge)

CHELSEA – On a night where the Chelsea softball team gave up an uncharacteristic 12 hits, three errors and eight runs, their offense picked up the slack firing off 19 hits of their own and putting up 18 runs in an 18-8 victory over the Pelham Panthers for their first area win of the season on Thursday, March 17.

The first four innings were a back and forth affair with both offenses doing their part. Every time Pelham (8-6, 0-1) thought they had seized control of the game, the Hornets came right back in the bottom half of the inning to snatch the lead right back.

Early on, in the first inning, Chelsea (12-2, 1-0) looked like themselves. Camryn Smith was pitching in place of Sarah Cespedes and started the game with relative ease getting three outs after facing just four batters. In the bottom half of the inning, the Hornets didn’t use a lot of power, but took advantage of small ball to grab a 3-0 lead.

Pelham attempted an answer in the top of the second as Emily Shirley led things off with a one-pitch home run over the center field wall to cut the lead to 3-1. The Panthers were able to tack on three more singles the rest of the inning, but were unable to put up any additional runs.

After a quiet bottom of the second for the Hornets, Pelham came to the plate in the top of the third and put together their most damaging offensive inning of the game.

The Panthers led the inning off with two walks and a single to load the bases for Kacie Maher. On the fifth pitch Maher saw, she hit a hard ground ball up the left side for a single to bring in two runs and tie the game at 3-3. A fielder’s choice by Cadence Crocker and a third single of the inning from H Helms brought two more runs home to give the Panthers a 5-3 lead.

For a few minutes, Pelham had taken control and looked like they had a strong chance of upsetting No. 1 Chelsea.

In the back-and-forth affair, however, Chelsea came to the plate in the bottom half of the third and started their attack with two straight singles. Two straight outs followed and it looked like the Panthers might get out of the damage with no damage, but Chloe Eidson had other thoughts. She singled on a line drive to right field that scored Smith and Brooke Burback to tie the game at five after three innings.

Now that Chelsea had the lead, Cespedes was put in the circle to try and preserve the win the rest of the way. Cespedes, normally one of the aces in the state, struggled a little bit early in her outing as the Panthers put together two singles and a double to take the lead back at 7-5. She finally settled in and didn’t allow any more damage the rest of the inning.

Chelsea came right back in the bottom of the fourth and put together six singles in the inning leading to six runs to be the first team to really distance themselves in the game.

Trailing 11-7, Pelham needed to make a run, but went 1-2-3 in the top of the fifth and was only able to put up one in the top of the sixth. The Hornets on the other hand had another dominant offensive inning in the sixth bringing home seven runs to take an 18-8 lead and end the game one inning short due to the run rule.

Gracie Bradford led the Hornets with four RBIs after going 2-3 at the plate with a double and one run scored. Smith also had a nice game swinging the bat, going a perfect 5-5 at the plate with three runs scored. Seven Chelsea players had an RBI in the game and all seven had at least two. Four different players also stole a base, including three by Allie Miller.