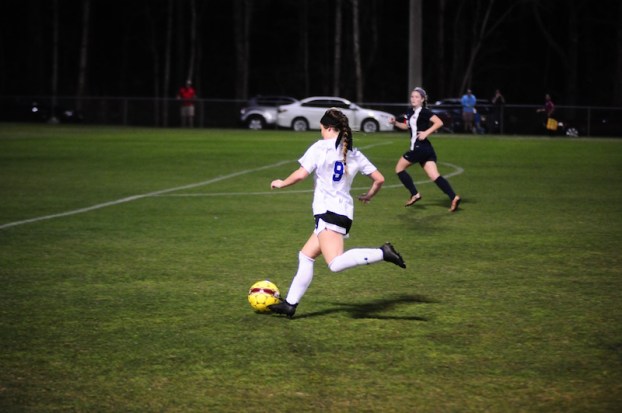 Chelsea’s girls soccer team is one of 14 ranked in the latest eurosportscoreboard.com standings. The Hornets came in at No. 3 in 6A. (Reporter photo/Alec Etheredge)

We’ve reached the fifth week of soccer rankings released by eurosportscoreboard.com, which is comprised solely of coaches from across the state of Alabama, and just like every week previous, Shelby County had a strong showing in each classification’s top 10.

A total of 14 teams from across the county were considered as one of the 10 best teams in their specific area, which is down from last week’s total of 14, but still an astounding number.

Yet again, for the second consecutive week, six schools saw both their girls and boys teams ranked inside the top 10, which starts with all three 7A schools in the county in Oak Mountain, Spain Park and Thompson.

Oak Mountain’s boys still sit atop the 7A rankings, having won four consecutive games, including the metro championship over county and area foe Spain Park on Saturday, March 18. They now sit at 10-2-2 overall and 2-0 in area play.

Spain Park’s girls are the higher of the two Jaguar teams as they found themselves in the No. 4 7A spot. The Jags still only sit with one loss this season and boast an overall record of 8-1-1 with an area record of 1-0. They have won six consecutive games and have a big matchup with the Eagles looming this week.

The boys on the other hand have hit rough sailing as of late losing four of their last six matchups. They still find themselves at No. 5 in the rankings with an overall record of 8-5 and an area record of 1-1.

Thompson’s girls (10-5-2, 1-1) sit shortly behind the Lady Jags at No. 7 having fallen from their highest ranking of No. 4 last week thanks to two straight losses and a tie. Their last win came on March 10 and they have now only won two of their last eight contests.

The boys also have failed to win a game in a while having gone 0-2-1 in their last three games. The Warriors’ last win came back on March 2 in a 3-2 victory over Prattville. With an overall record of 7-4-2 and an area record of 1-1, they are still good enough to be in the top 10, however, as they came in at No. 9.

The Pelham boys and Chelsea girls were the only two 6A teams ranked as Chelsea’s and Helena’s boys have dwindled over the past couple of weeks. The Panthers have lost two straight and three of four causing them to fall from their No. 1 ranking after sitting atop the standings for the past two weeks.  Despite four straight losses, the Hornets (5-6-2, 2-0) still sit at No. 3 in 6A rankings due to such a difficult schedule.

Briarwood’s boys and girls were the only 5A teams to find a spot in the standings. The girls came in as the higher of the two teams at No. 5, but haven’t played much over the last couple of weeks. They are 5-4-2 overall and 1-0 against area competition.

The Lions’ boys have been on fire as of late winning six of their last seven, with the seventh being a 2-2 tie with Sylacauga. They have an overall record of 7-3-2 and sit at 2-0 in area play with no losses since on their resume since Feb. 18, which is good enough for No. 6 in Class 5A.

In the 1A-3A standings, Westminster at Oak Mountain and Indian Springs both saw their boys and girls teams inside the top 10. The highest of which remained the Wesminster boys at No. 1 with a record of 9-1-1.

The Knights’ girls (6-1) also remain highly ranked as they were this week’s No. 3 team in the classification with an 8-0 win over Helena in the last week.

Indian Springs’ boys (10-2-2, 2-0) sit just behind Westminster’s at No. 2 after a very strong start to the season. They have now won three of four with a tie in between. Their girls jumped into the rankings last week for the first time and held steady this week as the No. 5 team thanks to two consecutive wins.