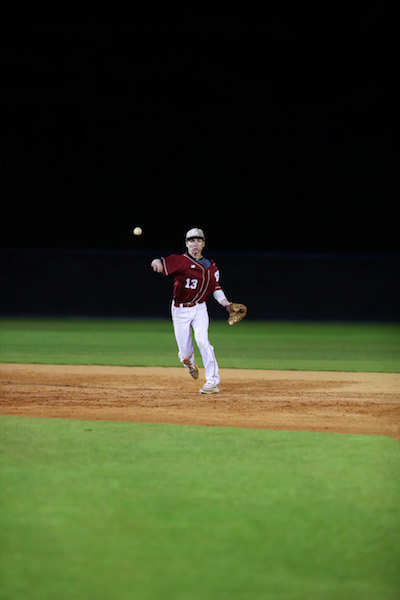 Shelby County’s Jordan Deaver had a nice game going 2-2 at the plate with an RBI and a run scored as he helped lead the Wildcats to a 6-4 win over Calera. (For the Reporter/Cari Dean)

COLUMBIANA – One of the big stories to start the 2017 baseball season has been the dominance of Calera’s pitching staff, but on Tuesday, March 20, the Shelby County Wildcats wanted to create a new storylie as they picked up eight hits and six runs on the Eagles’ pitching staff to upset the No. 4 ranked 5A team in the state 6-4.

It marked the second time this season the Wildcats had taken down this impressive Calera team and in both occasions they used their offense as they went off for 14 runs in a win back on Feb. 25.

An entertaining first inning at started in the top half as Calera started the game with two runs. Will Glasscock led the game off with a hard hit ground ball to second base that allowed him to reach on an error. A walk to Christian Hall and the Eagles were in business early.

Tyler O’Clair came to the plate next and drove a hard ground ball to the gap in left field for a double that brought home Glasscock for the game’s first run. With runners on second and third, Jacob Smith had a chance to drive in a couple of more runs. Smith didn’t do anything special as he grounded out to shortstop, but he did enough to bring in another run to give the Eagles an early 2-0 lead.

Normally any lead is enough for this pitching staff, but Shelby County came to the plate in the bottom half of the inning and answered quickly. After two straight outs to start the inning, Jordan Deaver reached on a single and proceeded to steal second, which was followed by an error allowing Chase Jones to reach base safely and Deaver to cross the plate. Jacob Walton was up next and in a 2-2 count, he found his pitch and hit a line drive to center field for a game tying single.

After a quiet second inning and top half of the third, the Wildcats came back to the plate in the bottom of the third inning. Adison Couch led the inning off with a walk and thanks to a sac bunt and fielder’s choice, he eventually made his way to third. The small ball ended up paying off as the pitcher balked allowing Couch to come home and give Shelby County their third two-out run of the game as they took a 3-2 lead after three innings.

Wildcats’ pitcher Chase Jones had locked in after allowing two runs in the first inning and didn’t allow another run over the next four innings. In the bottom of the fifth Shelby County took advantage of his brilliance on the mound and added some insurance runs.

With all of their runs in the game coming with two outs, the Wildcats changed that drastically in the fifth. They led the inning off with a walk and three straight singles to bring two runs across the plate to take a 5-2 lead before recording their first out. After a strikeout, Walton picked up another single to drive in their third and final run of the inning as Shelby County took a 6-2 lead.

Calera finally put together some offense in the top of the sixth for the first time since the second inning as they looked to rally. The Eagles used a walk, an error and two singles to score two more runs and cut the lead to 6-4.

Neither team threatened in the bottom half of the sixth or the top of the seventh as Jacob Walton came in to get the save for the Wildcats.

Walton went 2-2 at the plate with two RBI and one walk to lead Shelby County. Deaver also had a nice game going 2-2 with an RBI and a run scored. Jones got the win on the mound as he threw 93 pitches over six innings, while striking out three and giving up just two hits and four unearned runs.

O’Clair led the Eagles going 2-3 at the plate with one RBI and one run scored.

By STEVEN CALHOUN/Staff Writer The University of Montevallo has added two buildings to its athletics facilities. Team members and coaches... read more