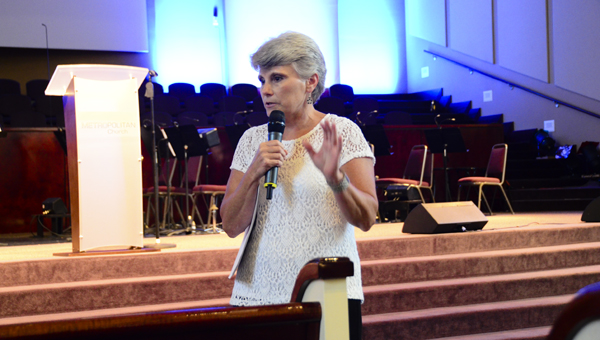 HOOVER – The Hoover City Schools Board of Education extended Superintendent Kathy Murphy’s contract by two years and received an update about capital outlay projects at its March 13 meeting.

“It will keep Dr. Murphy as superintendent of Hoover City Schools through June 2020,” Board President Stephen Presley said.

Murphy thanked the Board for the extension.

“I learn so much from my principals and I’ve learned so much from [the Board], and it’s my privilege to serve,” she said.

The extension does not include a pay raise.

Murphy’s original contract was set to expire at the end of June 2018.

Among other agenda items, the Board also received an update on capital outlay projects over the coming years, including painting, door replacements, HVAC maintenance and equipment replacements.

The capital outlay plan includes about $2.7 million of reserve funds and a $2.8 million allocation for a total of about $5.6 million in the current fiscal year.

Among the projects listed in information provided during the meeting were improvements to the Spain Park High School athletic track and turf.

Work is expected to begin in May, after a formal proposal has been brought to the Board in April, on the $9 million project.

Presley asked, and received an affirmative response, whether the improvements will allow the school to host tournaments because the Alabama High School Athletic Association, among others, could be interested in holding tournaments at SPHS and Hoover High School.