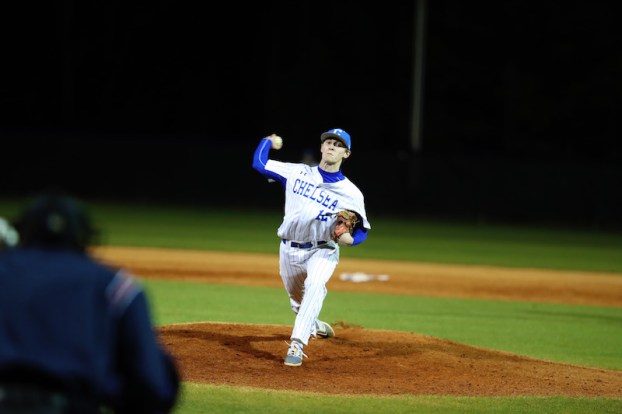 Chelsea was one of five teams ranked inside their respective top 10 in the latest ASWA baseball rankings. (For the Reporter/Cari Dean)

When the first ASWA baseball rankings of the 2017 baseball season were released last week, five teams from Shelby County were featured in the top 10 of their classification. In the second rankings of the season that number held steady, but with a couple minor changes.

One of the things that remained consistent was the No. 1 team in 5A as the Briarwood Lions did enough to still be considered the top dog in that classification. Last week the Lions were 11-1 at the time the rankings were released and since then they have gone 3-1. That second loss of the season came at the hands of the Oak Mountain Eagles on Tuesday, March 21, as the Eagles shut Briarwood out for the first time this season in a 6-0 contest.

That strong effort from Oak Mountain was impressive for the simple fact that the Lions’ offense may be the most potent in the entire state and they were able to hold them scoreless. Their outstanding performance as well as a 4-1 record in the last week was good enough for the Eagles to find a spot in the 7A top 10 as they came in as the No. 10 team in the classification.

That ranking may be a little low considering they sit behind seven teams that hold a slightly worse record and have played some of the premier talent from across the state. Continue to win with their difficult schedule and the Eagles will improve that ranking sooner rather than later.

Spain Park and Thompson were on the outside looking in when it came to the 7A top 10 as they both received a nomination. The Warriors are probably the best .500 team in the state as they sit with a record of 9-9. Five of their nine losses are by two runs or less, four of which are by one run or less. It’s just a matter of time before they put together consecutive wins and show they’re worthy of a spot in the top 10.

The Jags on the other hand are worthy of that spot now. They are probably the most overlooked team right now and should have found a spot in the rankings in each of the last two weeks. Spain Park currently sits at 11-6 on the season and winners of three of their last four games. Three of their six losses are by one run or less.

In the 6A ranks, Helena and Chelsea both continue to impress with strong starts.

The Huskies are 13-3 so far this season and have won eight of their past nine games, which was good enough for the No. 4 ranking in 6A. Their three losses are to 6A No. 1 Cullman, 7A No. 2 Grissom and 5A No. 3 Russellville. Helena is currently 1-0 in area play and finish their regular season series with Pelham in a double header with the Panthers tonight.

Chelsea sits just three spots below the Huskies at No. 7 with an overall record of 14-6. The Hornets have won seven of their last nine games, and have responded to a two game losing streak with two consecutive wins. Their biggest loss of the season was back on March 8, when they fell to Briarwood 5-1. Every other loss has been by three runs or less.

The last of the five to be ranked was the Calera Eagles, who were just three spots behind Briarwood in Class 5A as they came in at No. 4. The Eagles are tied with Helena as the second highest ranked team in the county. The Eagles are 11-5 on the season with losses to Shelby County twice, Opelika, Smiths Station and Chelsea.

The one team that fell out of the rankings was the Vincent Yellow Jackets, which is probably unwarranted. Vincent was No. 9 in the 2A classification a week ago with a 6-4 ranking and have since gone 3-1 to improve their record to 9-5. My guess is they will jump back in next week if they keep up the success.

Kingwood is in a similar scenario to Vincent and Spain Park when it comes to the AISA top 10 as they are sitting just outside with an overall record of 14-6. They have gone 4-1 since last week and with another 4-1 week over the next week should easily jump in.

By ALEC ETHEREDGE | Sports Editor One of the strongest senior classes boys basketball has ever seen in this county... read more