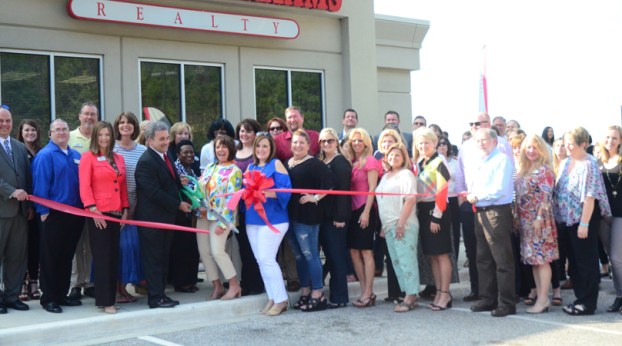 ALABASTER- Investors, team members and their families celebrated the grand opening of the new Keller Williams Metro South location on First Street in Alabaster with a ribbon cutting ceremony on Thursday, March 23 at 4 p.m.

Team Leader and Broker Anthony Arnone said Keller Williams was previously located at the Propst Promenade, and moved in order to make more room for realtors. According to Arnone, it has taken several months for the Alabaster Keller Williams to complete the moving process.

“We have all new furniture, and we had to get a larger training room because of all the growth we’ve had. We literally ran out of room where we were [at the old location],” Arnone said. “We went from 3,200 square feet to nearly 6,000. Growth does great things.”

New agents were also hired, and the new location has three conference rooms.

Arnone said the Keller Williams franchise has been an active business in the Alabaster community since 2008.

Sherry S. Conde, one of Keller Williams’s first investors, said she has seen a large amount of growth in the past 9 years.

Conde said, despite opening in the midst of the Great Recession, Keller Williams had had a large amount of success as a business.

“That is the best time to invest and open up a business, and we have truly been blessed since then,” Conde said.

“We believed in the vision of the Keller Williams model coming to Birmingham,” Wheeler said. “We own the investor rights to the Shelby County franchise.”

Wheeler said the expansions of the Keller Williams growth is mainly due to the real estate agents.“We really want to thank the agent community who has partnered with us and helped us grow,” Wheeler said.

Arnone said Alabaster is a great location for Keller Williams, and they appreciate all of the support they have received from the city.

“The city is a big reason that people want to live here. We’ve got a wonderful school system, and look at the number of businesses that have come here in the past 10 years,” Arnone said. “It’s similar to our growth. We’ve adjusted, just like the city has. We hope to serve the community for many years to come.”