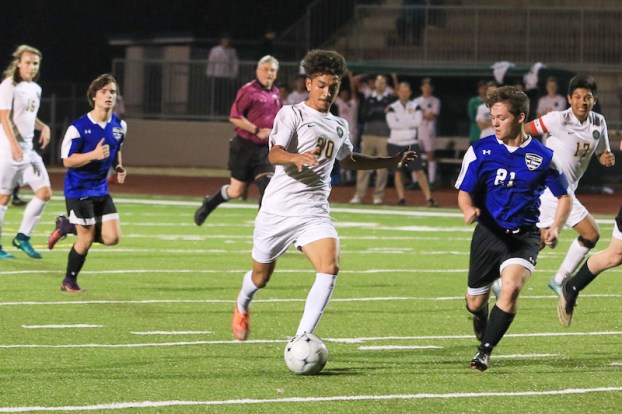 Irvin Rodriguez sprints by the Chelsea defender during the Panthers' 3-0 area win on Thursday, March 23. (For the Reporter/Dawn Harrison)

PELHAM – The Chelsea Hornets traveled over to Pelham High School on Thursday night, March 23, to take on the Panthers in a pivotal Class 6A Area 7 matchup on the pitch.

With the Hornets only winners of two of their past nine games, it almost felt like a must win for them to get back on the right track. Already sitting at 0-1 in area play, they couldn’t afford to fall behind any further, but a matchup with No. 2 Pelham isn’t the easiest way to get back on the winning track, and the Panthers proved that as they took care of business shutting out Chelsea 3-0.

Despite the first 14 minutes of the game were a back-and-forth affair, it was a strong first half that pushed Pelham to victory. Close to 15 minutes in, the Panthers got their first opportunity and took advantage as Brian Heredia found a streaking Jose Jimenez who put home the first goal of the game to give Pelham an early 1-0 lead.

A short five minutes later, the Panthers got another great look as Yunior Tejada sent a ball up the left side to Greg Blue who just beat the goalkeeper with a rocket to the near post that snuck in to give Pelham a 2-0 lead with 20 minutes to play in the half.

The rest of the first half saw Chelsea take slight control, and with five minutes left the Hornets got a great look from close in, but Pelham goalkeeper Seth Torman made a fantastic save to preserve the lead as they took a 2-0 advantage into the break.

The Panthers came out and continued to apply pressure to Chelsea’s back line and seven minutes into the second half they received a penalty kick inside the box due to a handball on the Hornets. Tejada took advantage and put the PK in the back of the net to extend the Pelham lead to 3-0.

After the Panthers continued to apply pressure hitting the post on several occasions, Lando Nichols finally started to find some space for Chelsea. Over the last 20 minutes of the game he came close to putting home several goals and just missed on an assist to Eli Alexander who pushed the ball just wide of the goal.

Pelham was able to hold on over the final minutes to complete the shutout to grab their second area win of the season. The Panthers now sit at 10-4-1 overall and are ahead of the pack at 2-0 in area play. Chelsea fell to 5-9 on the season and 0-2 in area play as they sit just behind 1-1 Helena.

By GRAHAM BROOKS / Staff Writer The week of March 20 was critical for the Helena and Pelham baseball teams... read more