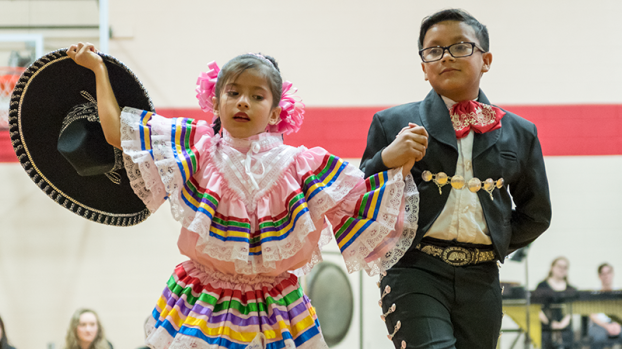 Members of a traditional Spanish dance group perform for Thompson High School students during the school’s culture fair on the morning of March 24. (Reporter Photo/Neal Wagner)

ALABASTER – Thompson High School senior Byran Aguirre was quick to share the praise with his classmates when asked about the elaborate display boards showcasing the history of El Salvador on the morning of March 24.

“We all worked together. Everyone had a different section to cover,” Aguirre said, taking a short break from presenting the nation’s history to his classmates. “It took several days for us to put all of this together – Probably about a week.”

Throughout the morning, all of the students’ hard work paid off, as THS held its first schoolwide culture fair. During the event, groups of students set up booths along the school’s back sidewalk to showcase nations ranging from El Salvador and Honduras to World War I-era America and Germany.

For freshmen Jailyn Clayton and De-de Hyunh, the project allowed them to step into the shoes of famous individuals who lived nearly a century ago.

“I enjoyed getting to put myself into the mindset of the people we wrote about,” said Hyunh, who worked with Clayton to research and write about World War I-era topics such as health care, fashion and famous war combatants. “When you think about World War I, you don’t normally think about all of those things.”

The success of the girls’ presentations hinged on the many hours of preparation and research they did leading up to the culture fair.

“It was a lot of late-night work and a lot of writing,” Clayton said with a laugh while flipping through a binder containing essays and photos covering their research subjects. “But it’s a lot of fun to see everything come together today after working on it so hard.”

For many of the school’s English as a second language students, the fair allowed them to showcase the heritage and culture of their birthplaces.

“Since we have so many students from different countries, each student was in charge of covering one topic about the country,” said THS English as a second language teacher Brandi Smith. “They are so excited to do this. When they come here, they learn so much about the U.S., and now they get a chance to share things about their home countries.”

THS Principal Dr. Wesley Hester said the event was largely student-organized, and said the fair likely will be come an annual event for the school.

“Creek View has a really nice culture fair every year, and that was a big inspiration for us to do this today,” Hester said. “This is not only a good event for us, it’s an accomplishment for our students. Today is a product of their hard work.”