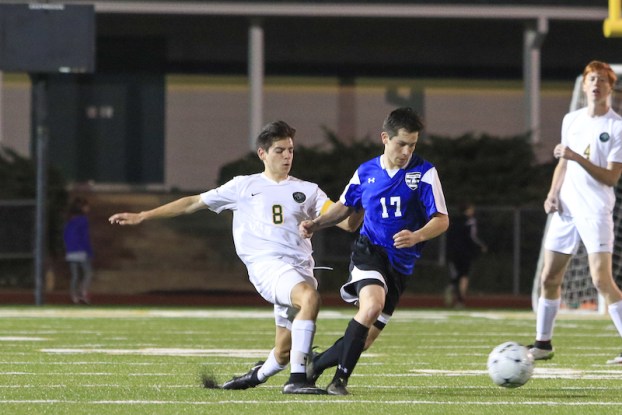 Pelham climbed back into the No. 1 position in the 6A top 10 after falling to No. 2 in the previous week. (For the Reporter/Dawn Harrison)

The week of March 27-31 marks spring break for most schools in Shelby County and with it comes the end of the first half of the soccer season. Despite all of the county teams taking a much needed break this week, their presence in the eurosportscoreboard.com rankings were very much active.

So far this season the county has seen no less than 14 teams ranked between the boys and girls and have seen a high of 15 in their respective poll. This week that dominance continued to take shape as 14 teams remained in the top 10, seven of which came on the guys’ side, which is where we will focus first.

As we start in 7A, for the sixth consecutive week to start the season, all three 7A teams from Shelby County are ranked inside the top 10.

Oak Mountain has held steady atop the rankings for the duration of the season, but came close to losing that spot this week after a 3-2 home loss to Mountain Brook who sits just behind the Eagles at No. 2. With a record of 10-3-2 overall, they have proven to be a strong contender in the state, but their most recent loss to the Spartans snapped a four game winning streak and sent them to 2-1 in area play, while Mountain Brook is at 3-1.

Slide down just a bit to the No. 6 position and you’ll find the Spain Park Jaguars. The Jags sit in the same area as the Spartans and Eagles, showing that it is one of the toughest areas to come out of and find a spot in the playoffs. Spain Park has gone 4-1-1 over its past six games and with a 1-1 record in area play and games left against Oak Mountain, Mountain Brook and Huffman twice in the second half of the season, they still control their own destiny.

Taking the last spot in the 7A top 10 was the Thompson Warriors, who also sit in a tough area. Right now they are on the outside looking in with a 1-2 area record and teams like No. 7 Hoover and No. 4 Vestavia in front of them. Area 5 and Area 6 are responsible for six of the top 10 in the classification.

Last week, after a two-week stint atop the 6A top 10, Pelham fell from the coveted spot down to No. 2. This week all is right in Panther nation as they fought their way back up to No. 1 thanks to back-to-back wins over No. 8 Homewood and area opponent Chelsea. Pelham now sits at 10-4-1 overall and is in the driver’s seat of Area 7 with a 2-0 record.

After going 6-0-1 in a seven game stretch the Briarwood Christian School Lions were in good shape, but they have since gone 1-1-1 to hold steady at No. 6 in the 4A-5A poll. After a 5-0 win over Westminster Christian Academy, the Lions fought to a 2-2 tie with a John Carroll School they should have handled with ease. Still though, they sit with an overall record of 8-4-2 and have a commanding 2-0 record in area play.

Finishing things off in the 1A-3A ranks, Westminster at Oak Mountain and Indian Springs not only found a spot in the top 10, but inside the top 3.

Indian Springs has soared up the rankings after winning four consecutive games and going 6-0-1 over their last seven games. They sit at No. 3 in the poll with an overall record of 13-2-2 and are frontrunners in Area 3 with a 3-0 are record.

After winning six games in a row, the Knights are on a more average trend having gone 1-1-1 over their last three games. They are still the No. 1 team in the classification, however, with an overall record of 10-2-1 and an area record of 2-0.