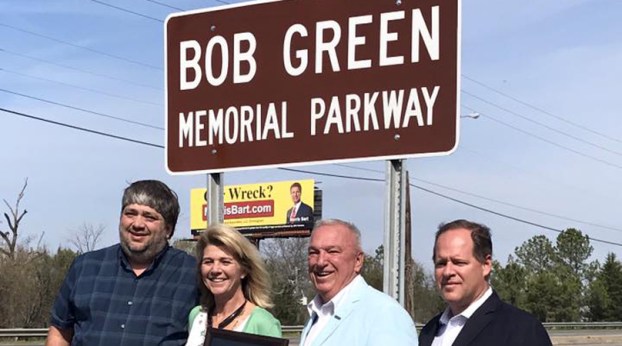 ALABASTER- The city of Alabaster dedicated part of U.S. 31 to late local business owner Bob Green on the morning of Saturday, March 24. The new Bob Green Memorial Parkway spans from near the intersection of U.S. 31 and Alabama 119 to the border of Alabaster and Pelham.

Alabaster Mayor Marty Handlon said plans to dedicate the highway were first developed shortly around Green’s death in the spring of 2016.

“This is a visual reminder of his legacy,” Handlon said. “When you see Bob Green Memorial Parkway, it’s a reminder of the kind of person he was in the community. It doesn’t change the name of the road, but it recognizes him and his legacy.”

According to Handlon, the dedication took place on the anniversary of Green’s death as a way to honor his memory.

“It was a very special day of celebration, remembrance and honoring Bob’s legacy with all of his friends and family around,” Handlon said.

The dedication ceremony began at the Shelby County Instructional Services Center. Columbiana Mayor Stancil Handley, who was Green’s best friend, incorporated the well-known Columbiana Trolley to shuttle participants to the intersection of U.S. 31 and Alabama 119, where the sign was unveiled.

The Bob Green Memorial Parkway was purposefully located on what is known as the Main Street Medical Mile, close to his business, Bob Green’s Alabaster Optical and Hearing Aids.

Because of his contributions to Alabaster, Green was awarded the keys to the city in a ceremony in January 2015.

“The proclamation I did two years ago was a lot like a biography. When he got sick, we wanted to recognize him while he was still here,” Handlon said.

Handlon said she hopes the Bob Green Highway will serve as a reminder to the city of the kind of person he was in life.

“He was one of those people who would help anybody, but he didn’t want anybody to mention it,” Handlon said. “If he knew of somebody who was in need, he always helped. He always gave away hearing aids and glasses to those who didn’t have the money to buy them.”

Jeffrey Barber Jemison Jeffrey Barber, age 63, of Jemison, passed away Sunday, March 19. A memorial service will be at... read more