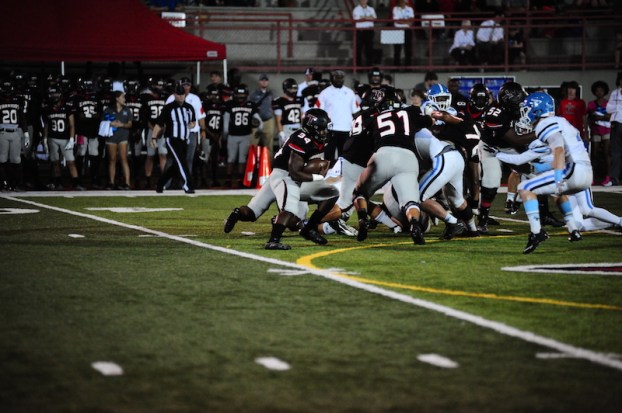 Thompson will not only have a new man under center for the 2017 football season, but a veteran offensive line to help protect him. (File)

Thompson getting top QB for 2017 season

ALABASTER – Once Alabama freshman quarterback Tua Tagovailoa joined the Crimson Tide this spring, rumors started swirling that his family, including younger brother Taulia Tagavailoa, would be moving to Alabama to be closer to Tua as he embarked on his next journey.

A few weeks back it was first reported by Taulia’s former offensive coordinator at Kapolei High School June Jones that he would be moving to Alabaster to join Thompson High School’s football program.

“I think he’s going to Alabama with his whole family to watch Tua. That’s what I’ve been told,” Jones said back on Feb. 16. “He’ll do great. It’ll be a great experience for him. A totally different culture, obviously. He’s going to Birmingham. I haven’t talked to Galu and Diane, but they’re going up this year for sure.”

Galu is Tua and Taulia’s father and he is the latest to not only make noise on the situation but confirm that his family is moving to Alabaster and plans to have Taulia and his little sister enrolled at Thompson High School by April 4.

The trek from Thompson High School to Bryant-Denny Stadium is only 58 miles and around an hour drive time, which gives them the perfect distance to give Tua his space while still be close enough to the 5-star freshman.

While Tua was considered one of the best recruits and quarterbacks in the 2017 class, some may feel that Taulia has big shoes to fill and may not live up to the hype.

To put that to rest, the rising junior led Hawaii in passing last year as a sophomore throwing for 3,919 yards and 42 touchdowns, which was just 66 yards short of the all-time passing record in the state set by Timmy Chang.

Adding to that, he has already received offers from Alabama, Oregon, Utah and Florida Atlantic.

Galu put the rumors to rest and officially made the confirmation to KHON2 news outlet and sports director Rob DeMello on Wednesday that his family was moving to Alabaster on April 3, and Taulia will be enrolled in school the following day.

Taulia will now have two years of eligibility with the Warriors and will immediately make them a favorite to compete for a state championship and get through one of the toughest areas in the state of Alabama.

With a new football facility on the horizon for the 2017 season, a new quarterback and a coach that knows how to develop and get the most out of players, Thompson is set up for a strong 2017 football season.

The Warriors will get there first look at the new highly touted quarterback on May 20 and he will be thrown directly into the fire as they host 7A state runner up McGill Toolen at 2 p.m. in a spring game, who went 13-1 a season ago.

Thompson on the other hand is coming off of a 5-5 season in which they lost three games by three points or less and will be looking to make certain improvements this spring.