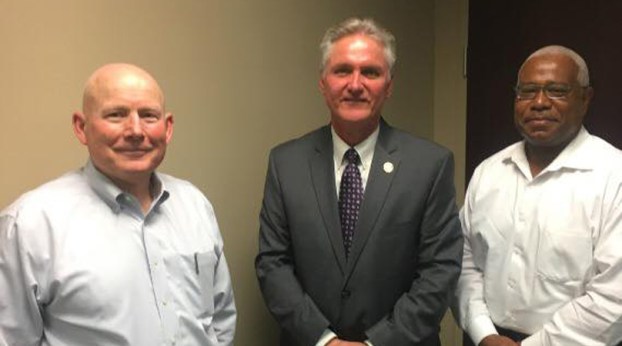 Mayor Tony Picklesimer met with ALDOT representatives about several projects in the city of Chelsea on Thursday, March 30. (Contributed)

CHELSEA- Chelsea Mayor Tony Picklesimer announced that completion dates on several of the city’s proposed projects have been set after he met with representatives from the Alabama Department of Transportation on Thursday, March 30.

“I have been pleased with the response that they have shown to our requests,” Picklesimer said after meeting with ALDOT State Representative John Cooper and East Central Region Engineer Dejarvis Leonard.

According to a press release, ALDOT recently started engineering plans for the entrance of the Chelsea Park Subdivision. The intersection at the entrance will have a right, eastbound turn lane going into Chelsea Park,  in order to increase visibility for cars. Construction is set to begin in the near future, and the anticipated completion date is set for Thursday, June 1.

The left, westbound turn on Shelby County 39 that leads to U.S. 280 will be extended. The project will be completed in conjunction with the one at Chelsea Park, and both projects have the same expected date of completion.

After the previous ALDOT update to the light signals on the intersection on U.S. 280 and Shelby County 47 on Jan. 10, Picklesimer reported that there has not been an accident at the intersection.

ALABASTER- The owners of Lazy Boy BBQ celebrated the opening of their second location at their grand opening and ribbon... read more