COLUMBIANA – A Shelby County grand jury will decide in the coming weeks if it will uphold a reckless murder charge against a 29-year-old Calera man who has been charged with allegedly causing a 2016 wreck resulting in the death of a Clanton man. 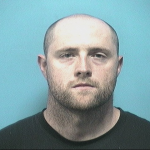 In February, Shelby County Circuit Court Judge Daniel Crowson bound over to a grand jury a reckless murder charge against Daniel Joseph Robinson, who lists an address on Daventry Trail in Calera.

The grand jury will review evidence in the case, and will determine if it will uphold or drop the charge against Robinson.

Robinson’s charges stemmed from an Aug. 4, 2016, crash, which happened at about 11:50 p.m. on Interstate 65 about one mile south of Alabaster. The driver of a 2011 Mitsubishi Lancer was parked on the shoulder of I-65 when a 2008 Nissan Altima driven by Robinson struck the Mitsubishi.

The Lancer was then struck again by a 2006 Hyundai Sonata, and the Lancer caught fire. The driver of the Mitsubishi, who was identified as 43-year-old Clanton resident Robert Alan Gentry, was pronounced dead on the scene, according to State Troopers.

Robinson was not injured in the crash, and the driver of the Sonata was taken to a local hospital to be treated for injuries.

According to court documents, Robinson allegedly had a blood-alcohol content of 0.06 percent at the time of his arrest.

According to Robinson’s arrest warrant, he allegedly did “under circumstances manifesting extreme indifference to human life, recklessly engage in conduct which created a grave risk of death to a person other than himself” when he drove “an automobile while under the influence which resulted in an accident and thereby caused the death of another person.”

Reckless murder is a Class A felony. If indicted and convicted on the charge, Robinson could face up to life in prison. He was released from the Shelby County Jail the same day he was arrested after posting a $75,000 bond.

PELHAM – Area residents will have an opportunity to shred unwanted documents and electronics during the Greater Shelby County Chamber... read more