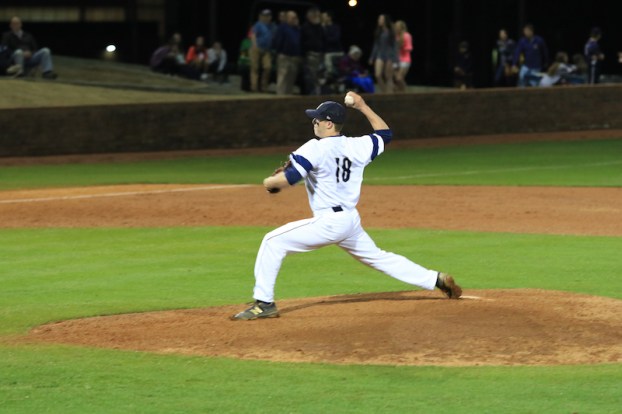 Briarwood proved they belong as the No. 1 team in Class 5A after sweeping the Mountain Brook spring break baseball tournament to improve to 18-2 this season. (For the Reporter/Dawn Harrison)

MOUNTAIN BROOK – Top-ranked Briarwood swept the Mountain Brook High School Spring Break Tournament March 31 and April 1 to improve to 18-2 on the season. After rain adjusted the schedule Thursday, the Lions took down 7A host Mountain Brook, 7-1, Friday, and then poured on runs Saturday to beat Vincent, 10-0, and Priceville, 16-5.

“We’re very happy to get three wins. We played about everybody on the roster and got some guys innings that haven’t been able to get in games. All-in-all it was a really good work week,” Briarwood head coach Steve Renfroe said.

Carson Eddy was hit to lead off Friday’s game against Mountain Brook and later scored on a two-out single by Cole Steadman to put Briarwood on the board. Will Baumbach and Kolby Kwarcinski followed with singles to give the Lions a 2-0 lead in the first inning. It became 3-0 Briarwood in the second inning when Hudson Hartsfield scored on an error in left after delivering a two-out single.

Chandler Cox delivered the Spartans’ only RBI of the game in the bottom of the fifth, with a line drive single to right to score Reid Hogue. Briarwood answered with three runs in the top of the sixth. Hartsfield drew a bases-loaded walk, and then Steadman drove in two with a one-out single to left. Graham Core drove in the Lions’ seventh run in the top of the seventh. Core and Steadman each hit 2-4 against the Spartans.

Sam Strickland struck out eight in five innings working on a pitch count. He allowed one run off five hits in the win, before being relieved by Michael Hiers, who did not allow a runner.

“He threw well. He was very economical with his pitches and we were able to bring Michael in to get a little work. That was a solid game. We played really well on defense, and we did enough at the plate to beat a good ball club,” Renfroe said.

Saturday, Briarwood started the day with a four-run first inning against Vincent and scattered two runs each in the second, fourth and fifth to run rule the Yellow Jackets, 10-0. Ben Metzger tossed a three-hit complete-game shutout with three strikeouts through five innings. In the night cap, Briarwood trailed Priceville, 5-4, after the second inning, but used an 11-spot in the third and tacked on a run in the fourth to enact another Mercy Rule. Noah Whatley recorded the win over Priceville in relief.

“He’s been consistent from day one in the four slot. He’s produced continuously,” Renfroe said. “He’s been a big plus, because we’ve got Sam (Strickland) in front of him, and if they don’t pitch to Sam, you have to face Cole. Him being the guy driving in so many runs has been a big lift to our offense.”

While 12 BCS players either scored or drove in the Lions’ 33 runs on 32 hits in the three wins, Renfroe says there work to be done at the plate before opening Class 5A, Area 8 play against Moody twice this week, on the road Tuesday and home Friday at 6:30 p.m.

“We didn’t see their number one guys (this weekend), and our approaches were OK. I think physically, we were just an older club and were able to do some damage, because they were down the line guys just pitching,” Renfroe said. “We played really well on defense … We’re going to face some really good arms coming up this week, and we’ll have to be a whole lot better than we were this weekend.”