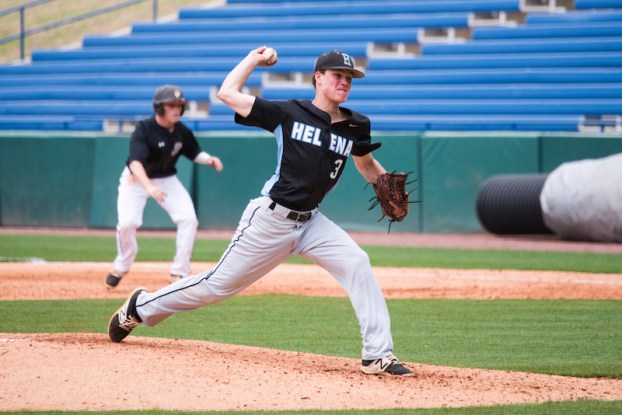 Landon Green fires a pitch during the Huskies’ game against No. 2 Spanish Fort, which they won 2-1 over a two-day span thanks to a rain delay. (Reporter photo/Keith McCoy)

HOOVER – Spring break brought the beach for many, but for the Helena Huskies it meant staying close to home to compete in the 2017 Buccaneer Classic, which took place at both Hoover High School and the Hoover Met from March 29 to April 1.

The Huskies may not have soaked in the rays, laid on a beach or road the waves, but what they did walk away with they wouldn’t have traded for one second of the cool Bahama breeze. After putting together seven consecutive wins in a tournament that featured eight teams, five of which were ranked, Helena won the 2017 Buccaneer Classic to improve to an incredible 23-4 on the season.

In their matchup with Moody, the Huskies tallied 17 runs in the bottom of the fourth inning to run rule the Blue Devils. To go along with their offense, Helena’s pitching staff also dominated opponents throwing a complete game in four of their seven outings and only giving up a combined 14 runs in the tournament.

After going a perfect 5-0 in pool play, the Huskies found themselves as the No. 1 seed during Saturday’s single elimination portion of the tournament. The Huskies took down Hartselle 10-6 in the semifinals before finding themselves in a championship matchup with host and 7A No. 5 Hoover.

Although Hoover outhit Helena 8-4, the Huskies took advantage of their opportunities putting up four runs on just four hits, while the Bucs left eight runners on base to fall 4-2.

The bulk of the scoring came in the bottom of the second as Helena started the inning with two singles and a walk to load the bases. Hoover was able to respond with back-to-back outs and was close to escaping the dangerous threat.

That, however, wasn’t the case as Nash Adams scored on an error by the catcher, which also advanced Troy Cordrey and Braylon Moss to second and third. Trevor Bell followed with a line-drive single to center field that scored both of those base runners to give the Huskies an early 3-0 lead.

Blake McAbee got the start on the mound for Helena and threw two consecutive scoreless innings to start the game, but Hoover put a dent into the Helena lead in the top of the third inning with two runs thanks to a leadoff double followed by a home run.

McAbee was able to settle in over the final four innings, however, not allowing another run on his way to the complete-game win. The Huskies added one more run in the bottom of the fifth thanks to a rarity in baseball where Bell stole home.

Bell led Helena at the plate going 2-2 with two RBIs and two stolen bases while also scoring a run. He was responsible for all but one of the Huskies’ runs in the game. McAbee went the distance allowing eight hits and two earned runs while striking out two.

Helena has now won 14 of their last 15 games and has established themselves as the front runner in Class 6A after their dominating spring break performance.

HOOVER – Spain Park’s baseball team bounced back from an opening loss to Helena on Wednesday, March 29, to even... read more