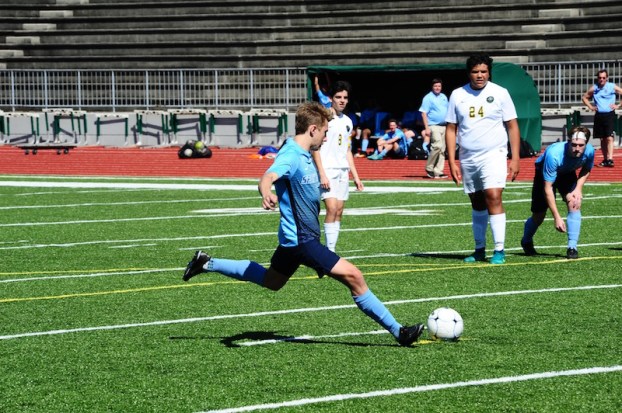 David Rice prepares to kick his penalty kick late in the second half, which he put in the left side of the net to give Spain Park a 2-1 lead. (Reporter photo/Alec Etheredge)

PELHAM – Some incredible clutch saves by Trevor Bernier in the second half and a hat trick by David Rice led 7A No. 6 Spain Park to a 4-1 win over 6A No. 1 Pelham on Tuesday, April 4 at Pelham High School.

If you just judged from the first half, you would have thought the Jags had no chance of winning the game as Pelham controlled the ball on their end of the field the entire half.

The Panthers came out strong getting two chances in the firs 3:30 of the game, but was unable to put a goal home. Spain Park got their first good chance of the game 4:55 into the game on a corner kick that was put right in the middle of box, but saved by Pelham goalkeeper Seth Torman who leaped above everybody to prevent any damage.

Less than a minute later, the Panthers got another great look on a cross pass to the middle of the field where they had a streaker wide open but the kick from 25 yards out just missed wide of the net.

Despite the early struggles, Spain Park got the first real threat of the game when they hit the cross bar on a break away with nothing but the goalkeeper to get by. Unfortunately for the Jags, the shot just missed by hitting the cross bar.

Pelham took advantage of the missed opportunity by the Jaguars as Edwuin Patricio Sostenes put in a beautiful shot from 17 yards out with 28:25 left in the first half.

Spain Park got one more decent look on a free kick by Rice from 45 yards out, but Torman jumps up to make another save just inside the box to maintain the Panthers’ 1-0 lead.

Pelham got several more good looks inside of 35 yards after controlling the ball over the final 22 minutes of the half, but never converted their chances into goals as they took a 1-0 lead into the half.

To start the second half, the Panthers picked up right where they left off in the first by getting another extremely good look two minutes into the half but just missing out on yet another great opportunity.

Spain Park was still trying to break through and get a corner chance 3:50 into the half, but the ball was headed out of the box as neither team could capitalize on their openings that were given to them.

Over the next 14 minutes, Pelham got several extremely close looks within 10 yards, but this is when Bernier became the MVP of the game. Each great shot went for naught as he made several remarkable saves including one where he fully extended his body and was able to get his fingertips on the ball to deflect it just wide left of the goal.

Bernier’s strong play kept Spain Park in the game as they could’ve easily been down 5-0. The Jags took advantage of their fortune and turned up the offensive pressure and turning into a completely different team over the final 23 minutes.

After his last incredible save, Spain Park took advantage and pushed the ball up the field which led to a fast break for two Jaguar players before Cameron Sumpter received the ball right in front of a wide open net, which he trickled in to tie the game 1-1 with 23 minutes left.

The next few minutes were pretty quiet, but Spain Park had seized control offensively. With 12:24 remaining Rice got a penalty kick that he easily put past Torman who guessed the wrong direction to put the Jags up 2-1.

Less than two minutes later SPHS got another breakaway opportunity and took advantage as Rice put home his second consecutive goal to put his team up 3-1. A terrible call after the goal got Torman ejected with a red card for talking to one of his teammates.

With Torman out Rice was set up for his hat-trick goal with 8:59 left to play off of a third breakaway in the last 15 minutes of play. He easily put it by the goalkeeper to give Spain Park their fourth goal of the half and a 4-1 win.

After not posing any threat offensively through the first 55 minutes of play, the Jags dominated the final 25 minutes to score four unanswered goals in the win.

By ALEC ETHEREDGE | Sports Editor NORTH SHELBY – Both the Briarwood boys’ and girls’ tennis teams have started the... read more