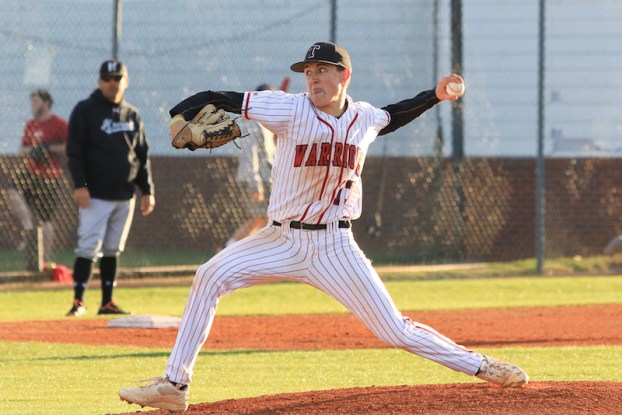 Thompson's pitching staff was key to splitting their area series with Hoover only giving up two combined runs in their doubleheader on Thursday, April 6. (For the Reporter/Dawn Harrison)

A week ago, on March, 30, the Thompson Warriors were within one game of a .500 record but have since struggled dropping two straight heading into an important area series with Hoover.

While they weren’t able to make the jump to get above .500, none of that mattered or was even remotely on the mind of any of these Thompson players or head coach Pat Hamrick. All that matters when it comes to making the playoffs is area play, and the Warriors got off to a nice 1-1 start in Class 7A Area 5 after splitting a pair of area games with Hoover between Tuesday, April 4, and Thursday, April 6.

While Hoover ended up taking the series with a win in the second game of a doubleheader on Thursday, all that counts toward each team’s area record is their first home and away game with an area opponent.

The Buccaneers are considered as the No. 4 team in the state, making Thompson’s split of the two area games very impressive and important.

In game one of the series, the Warriors struck first with two first-inning runs, and for a while it looked like they were going to be able to hold on for the win before Hoover scored eight unanswered runs combined between the fourth and fifth inning to take the game 8-3.

Three singles from Myles Brown, Braden Ashmead and Breydon Edmondson in the top of the first led to Thompson’s early 2-0 lead. Through the first three innings it looked like Drew Williams had Hoover in check as he had pitched three scoreless innings with relative ease.

In the bottom of the fourth, however, the Bucs strung together three singles and two doubles to drive in five runs and take a 5-2 lead. Hoover’s Brock Guffey got the start on the mound, and after allowing those two first-inning runs, Guffey settled in the remainder of the way.

That 5-2 lead was already enough, but when the Buccaneers added three more in the fifth, he had all of the cushion he needed. Guffey went on to pitch a complete game allowing just one more run in the top of the sixth and striking out 11 in the game. After their three hits in the first, the Warriors were only able to pick up four more the rest of the way.

Ashmead led the way going 2-3 at the plate with a double and two runs scored.

Game two was low scoring thanks to some impressive pitching, but it certainly didn’t lack entertainment, especially late. Trailing 1-0 in the bottom of the sixth, Thompson was able to score two runs and hold Hoover in the top of the seventh for a 2-1 win.

Both pitching staffs were a sight to see, and while Hoover’s Devin Cole and Griffin Lape combined for more consecutive scoreless innings, it was Thompson’s JC Parker who went the distance and got the win.

The Bucs took their 1-0 lead in the top of the fourth without a hit thanks to great base running after a hit batter and a sac fly to bring home Max Garvey.

In the bottom of the sixth it was a two-out single to left field from Will Conner that brought home both Chris Lewis and Josh Huner to give the Warriors a 2-1 lead, which they didn’t relinquish. Conner went 1-1 with two RBIs thanks to the clutch hit.

Game three of the series had no impact on the area standings, but decided the series winner as Hoover took down the Warriors in another low-scoring affair 1-0.

The Bucs picked up two of their four hits in the top of the third, and scored on an error to take a 1-0 lead, which ended up being all they needed thanks to some strong pitching.

Yet again, both pitching staff’s had strong performances on the mound and kept their team’s in the game. Scott Elgin went the distance for Hoover and got the win allowing just one hit to Myles Brown and striking out four.

JD Kytle picked up an impressive loss after also tossing all seven innings allowing just four hits and one unearned run, while striking out two.