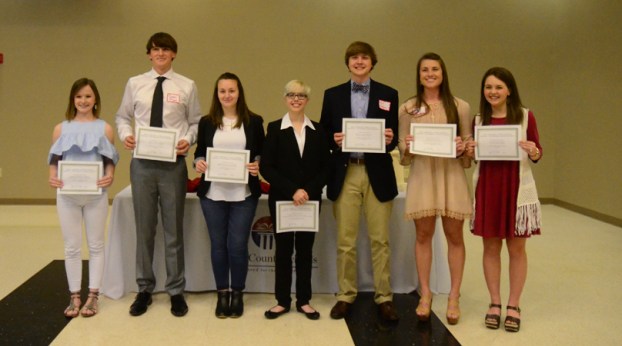 COLUMBIANA- The South Shelby Chamber of Commerce announced the 2017 winners of their scholarship program at a membership luncheon at the First Baptist Church of Columbiana on Thursday, April 6.

According to Executive Director April Stone, the South Shelby chamber was able to give away a total of $7,000, which was evenly divided between seven students at different schools. Stone said the students were selected from a pool of 55 applicants.

“This is just one small way the chamber can help our future workforce,” Stone said. “Any amount will help these students further their education.

This year, Stone said the chamber was proud to have included a student from Calera High School as a scholarship recipient.

“We saw the opportunity to expand, and we wanted to make the same offer to a student from Calera,” Stone said.

Andie Bryant, of Shelby County High School, will use the scholarship to attend the University of North Alabama and major in nursing.

Chelsea High School senior Sid Ridgeway plans to apply his scholarship to major in civil engineering at the University of Alabama.

Shelby Middleton, of the Shelby County College and Career Center, has plans to attend Jefferson State Community College next fall. Because of her involvement in the Helena Police Explorers, Middleton has decided to pursue a degree in law enforcement.

Shantell Skinner, of Vincent High School, will major in biochemistry at Spring Hill College. She plans to later attend medical school and become a pediatrician.

The National Weather Service in Birmingham announced that a severe weather outbreak is possible in several areas around the Southeast.... read more