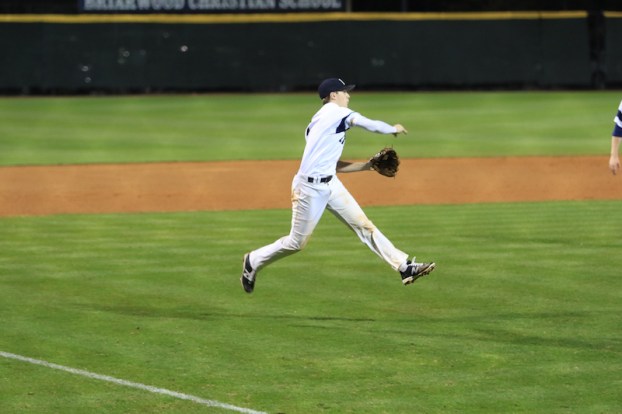 Briarwood picked up two area wins over Moody this past week as they continue to impress as the No. 1 team in Class 5A. (For the Reporter/Dawn Harrison)

Sam Strickland and Michael Hiers combined for a no-hitter Friday night, April 7, in the Lions 5-0 home victory over Moody to complete the series sweep. Strickland allowed four walks in the first three innings, but settled in and struck out 13 in his six innings of work. Hiers closed out the win by striking out the side in the seventh.

Briarwood opened the game with a three-run first inning after five walks and a single by Strickland. The Lions added two more runs in the fifth after Kolby Kwarcinski doubled to right with one out, followed by an RBI single by Whittlesey, his second RBI of the day. Hiers hit a two-out double to score Logan Whittlesey.

Whittlesey opened the series with a one-hit shutout, 11-0, on the mound Tuesday, April 4. His one hit came in the bottom of the first inning. He struck out six in the five-inning mercy-rule win and hit a two-run home run in the top of the third.

Briarwood collected five of its 13 runs in the first inning to plate four runs on RBI hits by Strickland, Cole Steadman, Will Baumbach and Kwarcinski. After Whittlesey made it 6-0 in the third, Hudson Hartsfield drove in a run with a two-out lie drive to center. Hartsfield hit 3-for-3 in the win with a pair of RBIs and finished the week hitting 5-for-6.

The Lions added four more runs in the top of the fourth on a RBI walk by Graham Core, a two-RBI single by Hiers and sac fly RBI by Hartsfield.

Baumbach and Kwarcinski each hit 2-for-4 in the win.

Gardendale 7, Briarwood 6 (8)
The Lions’ six-game win streak was snapped in non-area action Saturday, April 8, losing at Gardendale, 7-6, on a game-winning fielder’s choice in the bottom of the eighth. Briarwood led 5-4 entering the seventh inning and added a run in the top of the seventh. The Rockets evened the score in the bottom of the seventh to force the extra inning. Eddy drove in three of the Lions’ runs, while Sam Hamner (1-for-1) drove in two and Kwarcinski (2-for-4) knocked in another. Baumbach and Steadman also had two hits in the loss.

By Chris Megginson | For the Reporter MOUNTAIN BROOK – A pair of complete-game pitching performances led No. 5 Oak... read more