Despite obstacles with autism, Jacob Brady finds his place in wrestling 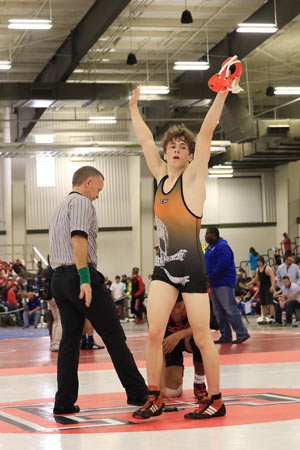 Hoover High School junior Jacob Brady won his last wrestling match in overtime in a sectional tournament Feb. 11 to qualify for the state tournament the next weekend.

“I did a crazy dance,” Jacob’s mother, Debbie, said of her reaction to Jacob’s win, which placed him in the top four of his 145 weight class and secured his spot among 13 HHS wrestlers headed to the state competition.

Although Debbie’s dance made 17-year-old Jacob cringe, he said, it surfaced because of how much Jacob’s success means to her.

Years ago, the thought of Jacob wrestling would have been inconceivable to his family.

The fevers stopped when Jacob entered kindergarten, but other problems surfaced.

“When he was in the first grade, he would have meltdowns,” Debbie said, likening his meltdowns to tantrums, with explosive talking, screaming and running out of the room. “They got worse as he got into school.”

Jacob was also speech-delayed, meaning his vocabulary didn’t expand at the same rate as his peers’ did.

Debbie, who has a master’s degree in counseling, had Jacob evaluated by a psychologist after the first grade to try to pinpoint the cause of his issues.

In November 2007, he was diagnosed with high-functioning autism.

For a couple of summers, Jacob did swim team, but he had trouble at the practices when other kids swimming in the same lane accidentally made contact with him.

The same thing happened when he tried to play soccer. Occasional contact with other players triggered Jacob’s meltdowns.

When he was in the third grade, Jacob started putting his head down on a regular basis, Debbie said.

She took Jacob to the neurologist for testing and found out he was having seizures.

He was treated with seizure medication and eventually stopped having them, Debbie said.

When he was in the fifth grade, Jacob started fencing, which was a good fit for him since it doesn’t involve much physical contact.

Then, Jacob’s situation worsened when he entered middle school.

Not only was he immersed in an environment with many students he didn’t know from other schools, but he started being bullied by other students.

“The beginning of middle school was tough,” Debbie said.

At the end of the seventh grade, though, Jacob gained a foothold at school through self-advocacy. He asked other students to help him navigate social situations.

In addition, his Individualized Education Program allowed him five extra minutes out of class to walk through the hallways before his next class to avoid contact with other students.

When he was in the eighth grade, Jacob came home and told Debbie he enjoyed wrestling in P.E. and wanted her to attend an informational meeting about joining the wrestling team at Simmons Middle School.

In disbelief, Debbie questioned her son, wondering how he could have enjoyed wrestling, a sport in which physical contact is mandatory.

Another student – someone who had fenced with Jacob since the fifth grade – confirmed what Jacob had told Debbie about wrestling at school, noting Jacob followed all of the instructions the coaches had given him in P.E.

“He stopped getting bullied,” Debbie said. “Everything kind of settled down.”

His coaches took time and worked with him, too.

“They’ve gone just above and beyond,” she said. “They moved him up to varsity during his freshman year. That was huge for him because that was unexpected.”

Hawk said he has learned much in his experiences with Jacob, whom he described as “a blessing to work with.”

“Jacob’s autism was challenging at the outset of our time together,” Hawk said, noting the Hoover’s wrestling team has a varsity squad, but the entire team practices together, and competing at a high level of wrestling requires frequent travel and overnight trips. “When Jacob was a freshman, I think that being around older wrestlers so often and the travel aspects of the sport helped Jacob with his social issues a great deal.”

Debbie said wrestling has helped Jacob learn to work with groups, and he has made friends with students at Hoover and rival schools, including Bob Jones High School and Central Phenix City.

“The other wrestlers have always been encouraging to Jacob,” she said. “The kids look out for him. We’ve been blessed.”

And Debbie said she thinks Jacob’s immersing himself in wrestling was his way of overcoming his fear of contact.

“I remember him saying, ‘I want to get stronger. If I’m stronger, kids won’t pick on me,’” Debbie said of Jacob. “You’re not going to be picked on if you have a team behind you, especially wrestlers.”

Hawk said his job as a wrestling coach is to give wrestlers tools that their body type and demeanor can use for success, and getting to know the personality of the wrestler helps to determine their best path to success.

For Jacob, the hyper-focus from autism works in his favor in wrestling.

“Molding a game plan for each wrestler based on my personal experiences with that wrestler is one of my greatest joys of coaching wrestling,” Hawk said. “Interestingly, Jacob’s autism provided him some advantages in the sport. Wrestling is an extremely detail-oriented sport. The difference between placing your hand 2 inches away from where it should be or how you lock your fingers together can be the differences between winning and losing.”

Debbie echoed Jacob’s attention to detail, describing him as a “rule follower.”

“Coach Jacob Gaydosh (and his father, legendary coach Steve Gaydosh) was an extremely successful wrestler not because he was an outstanding athlete, but because of his attention to detail and his work ethic,” Hawk said. “Both of these elements Jacob Brady has in spades. He was a sponge in the practice room, soaking up all of the information he could from our technique sessions.”

Hawk said Jacob’s singular focus in the room was to improve, while other wrestlers were easily distracted.

“I don’t enjoy practice,” Jacob said. “I enjoy the result of practice.”

Another advantage autism has given Jacob, and in turn, his team, is his knowledge of other wrestlers, Hawk said.

“We do a great deal of scouting before our end-of-the-season tournaments,” Hawk said, “And during my scouting report I would often ask Jacob to check and make sure the names of the other wrestlers were correct and to provide any information he could on the other wrestlers.”

Debbie said the coaches have told her they trust Jacob because they know he’s a good kid.

Jacob said he plans to continue wrestling through the end of high school.

When asked if he enjoys anything specific about wrestling, Jacob said, “Winning.”

As for Debbie and Jacob’s father, John, they are grateful to the teachers and coaches in Hoover City Schools that have gone “above and beyond” to ensure Jacob succeeds.

“We’ve had so many people that have really helped to get him on this journey,” Debbie said. “John and I can’t take all the credit. It takes a village.”

In December, the Bradys will have lived in Hoover for 11 years.

“I think God put us here in these years with compassionate people,” Debbie said. “We had more people go above and beyond for him. I really can’t say enough about the school system.”