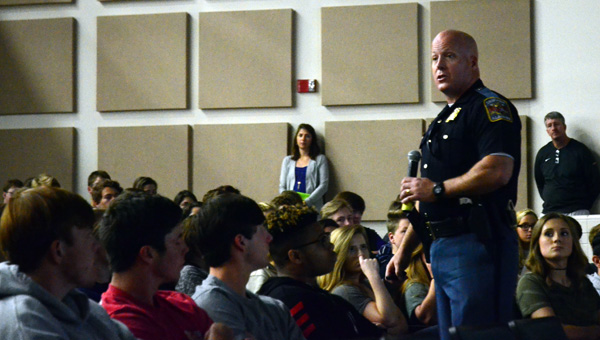 Senior Trooper Chuck Daniel with the Alabama Law Enforcement Agency asked the about 200 students in attendance if they drove to school that day.

Daniel said 16-year-olds are legally allowed to drive, but “what they fail to tell them is it’s the most dangerous thing you will ever do.”

Daniel said Alabama ranks fifth in the country in teen drivers killed in wrecks and that 60 percent of people killed in Alabama wrecks were not wearing seat belts.

He then showed a video with images of deadly wrecks the trooper has worked.

“As an Alabama State Trooper, I’ve seen more death in the last eight years than I have in my entire life,” Daniel said.

The “common denominator” in all the wrecks shown in the video was that all involved young drivers, he said.

Before Daniel’s presentation, Tisha Pate with MADD showed a video about her daughter, Christin, who was killed in 2012 at the age of 19 in a wreck involving a drunk driver.

Christin had a 3 1/2-month-old daughter of her own who does not remember her mother.

“Not only did I lose my daughter; her daughter lost her mother,” Pate said.

Pate said it took her a long time to accept that the incident was not her fault.

“It will never be the same,” Pate said and asked the students in attendance not to drink and drive. “My life has changed. I don’t want another parent to go through the nightmare I’ve been through. No parent should have to go through that.”

By NEAL WAGNER / Managing Editor Shelby County is home to two of the largest public high schools in the... read more