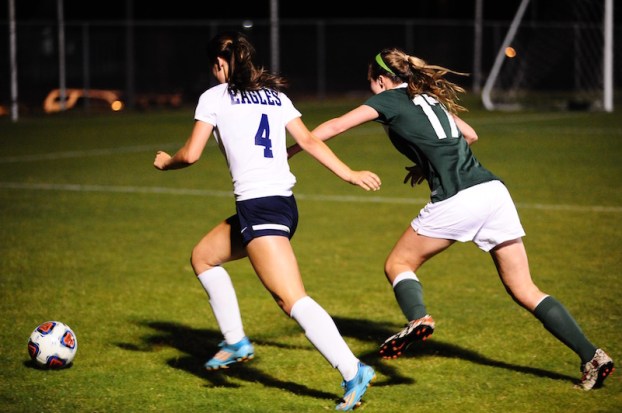 Julia Pack had the clutch game-tying goal with 9:29 left to play, which eventually set the Eagles up for a 5-4 win after double PKs. (Reporter photo/Alec Etheredge)

NORTH SHELBY – Two of the best team’s from Class 7A Area 6 faced off against each other on Tuesday, April 11, which means two of the best teams in the state squared off as the Oak Mountain Eagles played host to the Mountain Brook Spartans in a very important area showdown.

Not only are the two teams both in the top 7 of the state’s coaches poll, but both are also vying for an area championship and a spot in the 2017 playoffs. While the Eagles were already 3-0 in area play and most likely in the playoffs, Mountain Brook needed a win and they sure did play like their playoff lives were on the line.

Not only was regulation not enough time to determine a winner, but neither was two five-minute periods of extra time or one series of PK’s as the two teams remained tied until a second set of penalty kicks took place.

After close to two-and-a-half hours of game time, Oak Mountain’s Sara Scherer finally put an end to the game in the second set of PKs. With both teams hitting their first free kick, Mountain Brook had their second blocked, setting up Scherrer for the win, who put it easily into the left side of the net for a 5-4 win. 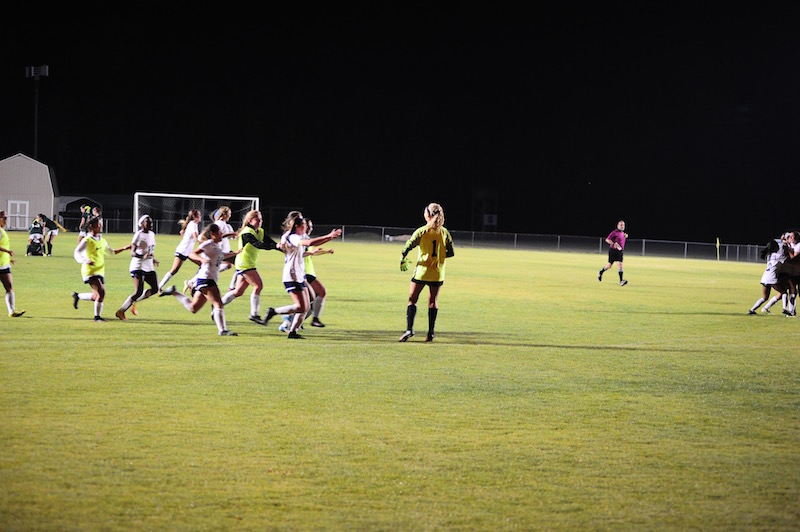 Although Oak Mountain dominated ball control throughout the first half of the game getting seven great looks compared to the Spartans’ three, neither team was able to score a goal, making the chances all for naut as they went into the half in a 0-0 tie.

Mountain Brook came out much more aggressive in the second half and matched the Eagles’ intensity as each team sprinted up and down the field. The first 25 minutes of the half were still rather quiet scoring wise despite several great opportunities, but that finally came to a halt with 14:43 left in the game after the Spartans got a rebound goal off of a free kick.

The original shot was a beautiful fingertip save Alyssa Vess, but the rebound bounced around slipping out of Vess’ hands and off of several other players before finding its way into the back of the net for a 1-0 Mountain Brook lead.

The deficit may have been a blessing in disguise for Oak Mountain as they started to turn up their intensity and press on the offensive end as they had resorted to desperation mode. Eventually the pressure became too much for the Spartans.

After just missing on a cross pass right in front of the goal with a wide open net, the Eagles responded by grabbing the errant pass and getting it back in the box where Julia Pack lofted a beautiful goal straight over the goalkeeper’s head to tie the game at 1-1 with 9:29 left to play.

In the first set of penalty kicks, Oak Mountain led off by driving home the first goal, while the Spartans missed their first attempt. They were in luck, however, as the Eagles went on to miss three straight shots, while they put home two in a row.

After Vess blocked the Spartans’ fourth attempt and Oak Mountain drove home their fifth, Vess was forced to block Mountain Brook’s fifth attempt to extend the game and in the clutch she came up big and did so to force a second set of PKs. 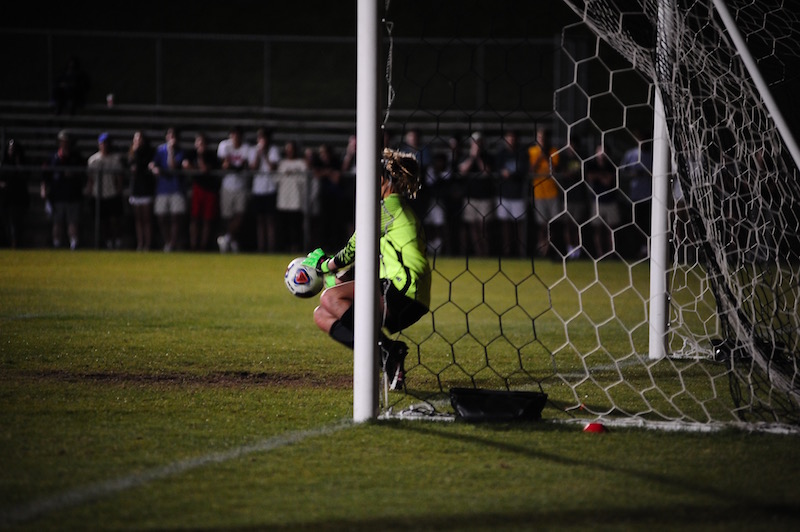 Vess blocks a PK that saved her team the win. (Reporter photo/Alec Etheredge)

In the second set of penalty kicks she also helped offensively by scoring in their first attempt and then stepped to the line to block Mountain Brook’s second attempt before Scherer put home the game-winner for a 5-4 win.

Oak Mountain moved to 13-2-2 overall with the win and 4-0 in area play as they sealed a spot in the 2017 playoffs. The loss by Mountain Brook keeps them in a battle with Spain Park for the second playoff spot in the area.