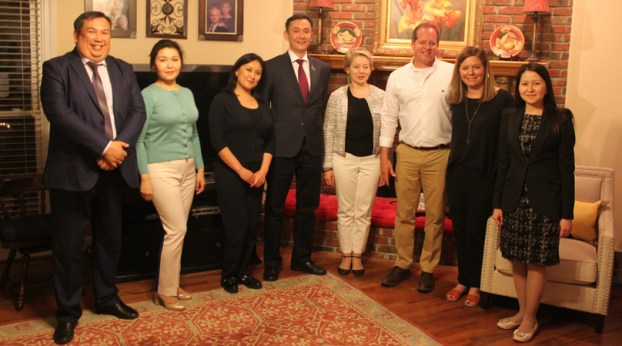 ALABASTER- Alabaster residents Tom and Charlotte Laggy hosted a dinner at their home for six delegates from Kazakhstan as part of the Friendship Force Open World program on the evening of Sunday, April 9.

During the evening, state Sen. Cam Ward, R-Alabaster, led an informal discussion and answered questions about the legislation processes of Alabama and the U.S., as opposed to those in Kazakhstan.

According to Tom Laggy, he and his wife were able to act as hosts as members of the Birmingham chapter of Friendship Force, a non-profit organization that seeks to promote peace and understanding on an international level.

Friendship Force members often travel to other parts of the world or open their homes to members from foreign countries.

“When we go to another country, we stay in the homes of club members. We live with them, eat with them and follow their way of life,” Tom Laggy said.

On Monday, April 10, the six delegates traveled to Montgomery, where they observed a legislative session and met with Alabaster resident and former Alabama Republican Party Chairman Marty Connors.

Laggy said the visit was eye-opening for everyone involved, and served as an opportunity for two groups from different countries to learn about each other’s cultures.

“One of our members asked what they [the delegates] thought of America. They said they were surprised that there wasn’t a violent atmosphere and everyone was so friendly,” Laggy said. “I think a lot of people have this idea that our country is more violent than it is. They just saw normal Americans living their everyday lives.”

To learn more about the Friendship Force Birmingham chapter, visit Thefriendshipforceofbirminghamal.org. Meetings occur on the third Sunday of January, March, May, July, September and November at the Vestavia Civic Center.