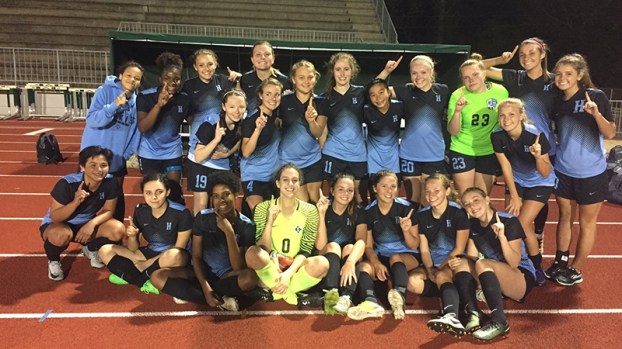 PELHAM–The Helena Huskies girls soccer team faced off against area opponent and rival Pelham for the second time this season with the goal of sweeping both regular season games.

Helena was able to complete the season sweep but had to work every second and fight for every possession to get the 4-3 overtime win on Tuesday, April 11.

Helena defeated Pelham earlier in the season 4-1 on March 16, and Pelham had payback on its mind on its home field.

The game went into halftime tied 1-1 but the biggest factor in the game was the play of Helena eighth grader Taylor Davis, who recorded three goals in the contest including the decisive goal in overtime.

The game was tied 3-3 before Davis put her third and most important goal in the back of the net in overtime to give the Huskies a big win.

Helena held an 8-3 advantage in corner kicks over the Panthers and Skyler Conway also recorded a goal for Helena. Juli Tatum and Gracey Thornton were credited with one assist apiece for the Huskies.

By GRAHAM BROOKS / Staff Writer CHELSEA–After defeating Pelham 7-0 in the first area game of the season a few... read more