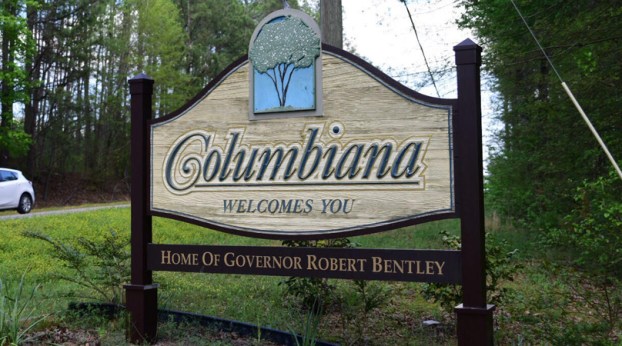 Columbiana Mayor Stancil Handley said he does not anticipate that the city will take down the signs that read “Home of Governor Robert Bentley” under the city’s entrance signs. (Reporter photo/Keith McCoy)

COLUMBIANA- Despite the scandal surrounding former Gov. Robert Bentley’s resignation, Columbiana Mayor Stancil Handley said the signs that read “Home of Governor Robert Bentley” will still be displayed under each of the city’s entrance signs.

“Why would anyone think we wouldn’t? These signs designate that he was reared here,” Handley said. “There are not any plans to remove the signs.”

In Handley’s opinion, the removal of the signs would feel like an attempt to erase a part of Columbiana’s history.

“He made a mistake, but we’re still proud that we have had a governor from Columbiana,” Handley said. “We had someone who was of the caliber to become governor.”

Three years after Bentley’s election in 2010, Handley said the city installed the signs under all five of the city’s entrance signs.

On Tuesday, April 11, the Bentley sign on Shelby County 47 was reported as stolen.

Handley said he has not heard any dissent from other city officials, but is open to feedback from them and from residents.

“The city council hasn’t even discussed it. If the city decided otherwise, we would remove them, but I don’t anticipate that happening,” Handley said.

Bentley was born in Joinerstown, near Columbiana, in 1943, and is an alumnus of Shelby County High School. Handley said Bentley still has family and owns property in Columbiana, which he visits “from time to time.”

By EMILY REED / Special to the Reporter CHELSEA – The King’s Home is currently taking orders until May 31 for a... read more