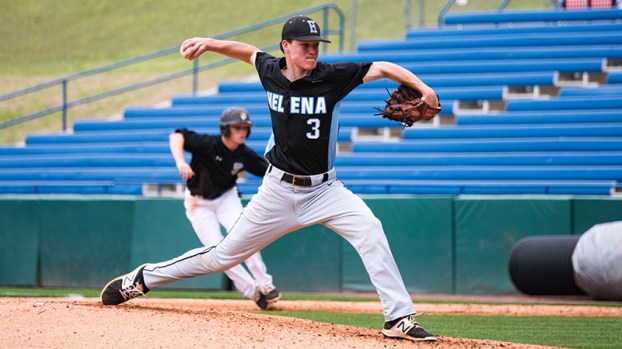 The Helena Huskies baseball team couldn’t have asked for better results in the teams’ inaugural season in the 6A Classification.

Incredibly, Helena finished with a perfect 6-0 record to finish as the Class 6A Area 8 regular season champion. The Huskies swept rival Pelham earlier in the season and swept Chelsea the week of April 10 to finish on top.

Helena outscored Chelsea 27-3 in the three game series and dominated on both offense and defense in the wins.

Game one of the series took place at Helena High School on April 11, and from the start, Huskies’ starting pitcher Riley Davis was magnificent on the mound and at the plate as Helena 10-run ruled the Hornets in a 10-0 win.

Davis threw a shortened complete game due to the 10-run rule as he pitched five innings while giving up four hits and recorded one strikeout.

Davis also helped himself on the mound by going 2-for-3 at the plate. Davis had a single and a bases clearing double to finish with a game high three RBIs for Helena.

Leading 3-0 heading to the bottom of the third inning, the Huskies broke the game open with a 7-run inning.

The inning started with a leadoff single by Nash Adams, followed by a walk issued to Nick Ragsdale. Braylon Moss then singled to score Adams to make it 4-0. Trevor Bell was then hit by a pitch to load the bases. Jake Busby collected an RBI single and Davis cleared the bases with an RBI double to extend Helena’s lead to 8-0.

The Huskies weren’t done in the inning as the final two runs were scored on a fielder’s choice and a passed ball.

Chelsea couldn’t push a run across in the fourth or fifth innings and the game was called after the top of the fifth inning due to the 10-run rule.

On Thursday, April 13, Helena and Chelsea met for the first of two games on the day and much like the 10-0 win in game one of the series, Helena once again had the bats going.

As a team, Helena finished with 13 runs on 16 hits and Huskies pitchers allowed just four Hornet hits for the second straight game.

Leading 4-2 after two innings, Helena had a big inning in the top of the sixth to break the game open.

Ragsdale led off the inning with a solo home run to make it 5-2 Huskies. A walk, single and error followed to load the bases. Davis hit an RBI single to make it 6-2. Sam Praytor collected an RBI single followed by Brooks Brophy hitting a two-RBI single making it a 9-2 advantage. A fielder’s choice and a wild pitch resulted in the final two runs scored in the inning as Helena took a commanding 11-2 lead.

Helena starting pitcher Landon Green gave up two runs and three hits and struck out five in five innings of work. In relief, Brophy pitched the final two innings and gave up just one hit.

Ragsdale led Helena at the plate going 3-for-3 with three RBIs.

The final game of the series was by far the most competitive as the Hornets attempted to salvage a game in the series.

Despite outhitting Helena 5-3, Chelsea fell 4-1 as Davis came through with a clutch two-RBI single in the top of the seventh inning to give the Huskies the series sweep.

Praytor also hit a sacrifice fly in the top of the seventh to score the fourth and final run of the game.

Both teams got solid performances on the mound as Helena’s Troy Cordrey pitched a complete game giving up five hits and striking out seven.

On the other side, Chelsea countered with six strong innings from Riley Watkins who gave up just two hits and struck out three in the loss.

Down 4-1 in the bottom of the seventh inning and down to their last out, Chelsea had the bases loaded and a chance to tie the game or win it with one swing of the bat. However, Cordrey was able to strikeout Evan Mealins to end the game and cap off the perfect regular season area record.

Helena is arguably the hottest team in the state right now. The Huskies have now won 12 in a row and their last loss came on March 25 against Russellville. Helena sits at 28-4 overall and has received attention from many national high school baseball polls.

Helena will host the first round of the 6A playoffs April 21-22.

By GRAHAM BROOKS / Staff Writer BIRMINGHAM–Helena senior Maggie Blanton, and 104 other high school seniors across the state of... read more