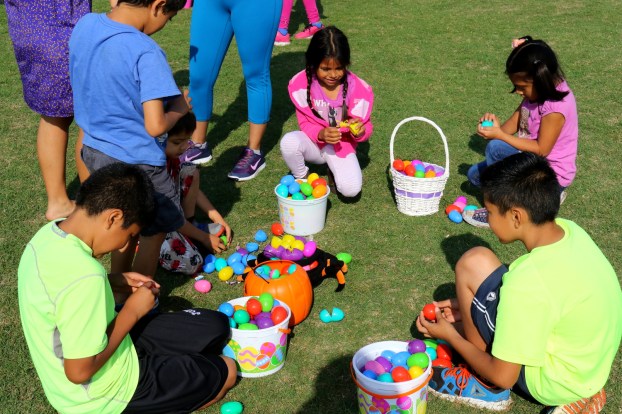 Children admire their egg collections after the Easter egg hunt on April 15, 2017. (For the Reporter/Eric Starling)

PELHAM – From the time the gates opened and children flooded the youth football field at Pelham City Park, it took a total of seven minutes for them to collect 10,000 Easter eggs filled with candy and toys during the city’s annual Easter egg hunt on Saturday, April 15.

“This is definitely one of the bigger turnouts that we’ve ever had,” Parks and Recreation Director Billy Crandall said. “This year’s hunt took about three minutes longer than it did last year.

“If I had to guess, I’d say at least 500 children and their parents showed up for the egg hunt,” Crandall added.

The Easter Bunny also made an appearance at the event to take pictures with children.

Parent Kamyla Leach said it took some convincing for her 4-year-old son to take a picture with the Easter Bunny.

“He was very scared,” she said. “I was kind of surprised because he did so good when he met Santa, but that wasn’t the case with the Easter Bunny.”

Crandall acknowledged and thanked a handful of Pelham Police Officers present at the hunt that helped him spread all of the Easter eggs across the field prior to the event.

Leach said seeing the police officers participating was one of her favorite aspects of the egg hunt.

“I like to see our officers participating in events and interacting with the community,” Leach said.

“I like how all of children went all at once,” Ariel Braswell said. “I wouldn’t have wanted to wait.”

John Braswell said his son had a great time at the event.

“He went all over and was very enthusiastic,” he said. “By the time is was over he was out of breath. This was our first time coming and we would come back again because it was very convenient.”

PELHAM – The Department of Public Health has confirmed two separate cases of rabies in Shelby County, in the areas... read more