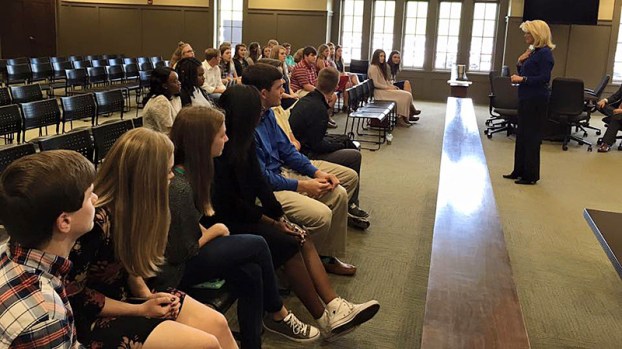 ALABASTER – Those in attendance at the April 10 Alabaster City Council meeting got a chance to see the city’s future leadership, as Mayor Marty Handlon held a swearing-in ceremony for the newest members of the Teen Council.

During the meeting, Handlon administered the oath of office to 29 students from Alabaster’s public and private high schools who applied for and were selected to serve on the upcoming Teen Council session.

Handlon chose the Teen Council members from among dozens of applicants over the past few weeks.

During their time serving on the council, the teens will complete a team building day at Family Connection in late April before holding regular meetings with Handlon and will be involved in organizing teen-focused events such as movie nights and a water slide day this summer.

“I’m looking forward to serving with this group,” Handlon said during the April 10 meeting.

The following teens were named to this year’s Teen Council: