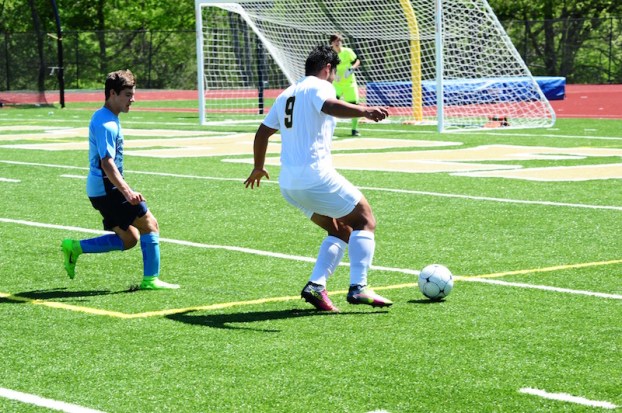 Spain Park and Pelham both found a spot in their respective top 10. The Panthers were one of three No. 1 teams out of the four total classifications. (Reporter photo/Alec Etheredge)

The soccer season is starting to wind down, but the success of Shelby County teams is not as seven boys teams from across the county remained ranked in the latest eurosportscoreboard.com coaches rankings.

For the second straight week, a Shelby County team was ranked No. 1 in three of the four classifications’ top 10.

Oak Mountain has sat atop the 7A standings this entire season and that continued this week as the Eagles came in one spot ahead of area foe Mountain Brook. Since the last rankings, they have gone 2-1 with wins over the Spartans 4-2 and Auburn 6-0. With its win over Mountain Brook, Oak Mountain clinched a berth in the 2017 postseason and the area championship.

While the Spartans sit as the No. 2 team in the 7A rankings, they won’t even finish the season as the second best team in their area thanks to the Spain Park Jaguars. Spain Park, who came in as the No. 7 team, took down Mountain Brook 5-2 on Monday, April 19, with the winner moving on to the playoffs. The Jags have now won five of their last six as they are putting together wins when they matter most.

Also snagging a spot just inside the top 10 was the Thompson Warriors, who took the No. 9 spot. Thompson has now won four of its last five games after losing three straight. Included in those four wins is a 1-0 win over area foe Hoover, redeeming an earlier 3-0 loss to the Bucs. The Warriors are 11-6-2 overall and 3-3 in area play.

For all but a couple of weeks this season, the Pelham Panthers have grabbed the No. 1 overall spot in Class 6A and that was no different this season. The Panthers are on a tear right now having won seven of their last eight matches. In those seven wins they have outscored opponents 25-2 as they continue to prove they are a legitimate contender to bring a state championship back to Pelham.

Briarwood is a steady consistent team this season, which has them slotted in the No. 6 position in the 5A standings. The Lions have won four of their last five games and have yet to lose back-to-back games this year. They sit at 12-5-3 overall and 4-0 in area play. Four of their five losses are in 2-1 games showing they don’t let any game get out of their reach.

Slide down to the 1A-3A top 10 and you’ll find the county’s third No. 1 team as Indian Springs took the top spot. Right behind them sits Westminster at No. 2 and both are two of the best soccer teams in the state. It wouldn’t surprise me if they were battling for the state championship in a few short weeks.

Springs holds an overall record of 15-2-4 overall and 5-0 in area play. They haven’t lost a game since March 4 going as they are proving to be one of the hottest teams around. 8-0-4 in that time span.

Westminster isn’t much worse. After sitting atop the standings for much of the year, the Knights were dethroned a couple of weeks ago, but have gone 14-1-3 over its last 18 games.

Each of these teams in their respective top 10 is a strong threat to bring home a state championship and I wouldn’t be surprised if the county brought home at least three championships.

By ALEC ETHEREDGE | Sports Editor The trend of having at least one county team ranked in all four of... read more