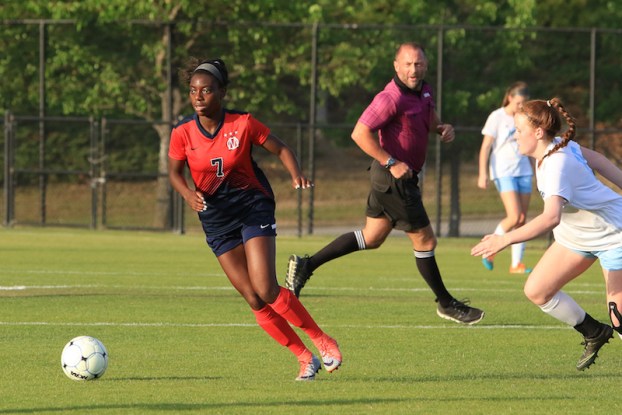 Nicole Payne had another strong game for the Eagles, pitching in for two of their four goals on the night. (For the Reporter/Dawn Harrison)

HOOVER – A few weeks back on March 21, Oak Mountain took a 5-0 halftime lead over Spain Park thanks to a first-half hat trick from Hailey Whitaker before going on to win that game 6-0.  On Tuesday, April 19, it was a lot closer of a contest as the rivals met at the Jags place this go around.

While Spain Park was able to find a lead in the first half and a tie early in the second half, the Jags went on to lose 4-2 creating the same outcome as a few weeks prior, but the two-goal loss this time around can still spark some confidence for this Jaguar team.

Through the first 37:56 of play in the first half both teams went back-and-forth getting great looks at the goal, but not capitalizing. At the 37:57 mark, however, the Jags ended that streak of missed opportunities when Jasmine Greene broke away up the left side of the field and rocketed a ball by the Oak Mountain goalkeeper to give Spain Park a 1-0 lead as they looked for redemption in the key area matchup.

Less than 30 seconds later, the Eagles said “not so fast,” as they responded with a goal of their own. Julia Pack sprinted up the near sideline before crossing over the defender and taking it inside the penalty box. She eventually created enough space just outside of the goalie box to fire the ball into the back of the net with her left foot.

After almost playing a complete half with no goals, the two teams put up one apiece in the final two minutes of play to go into the half tied at 1-1.

Coming out of the halftime break, both teams went right back to the back-and-forth game and it was just a matter of time before one of them took advantage of another great look.

That opportunity came just over six minutes into the half when Nicole Payne, the Eagles fastest player and a major offensive threat, was able to get free in front of the goal and easily push the ball past the Jags’ goalkeeper to give Oak Mountain a 2-1 lead early in the half.

Just like the Eagles quick response to Spain Park’s goal in the first half, the Jags put together a lightning fast answer after Abbie Kleckley got the ball off a free kick from just outside the right side of the penalty box and was able to fire it into the net to knot the score a two apiece.

Over the next 19 minutes, the game went back to an up-and-down affair as the two teams traded punches. With 14:22 left Pack got the ball got the ball just on the edge of the box and squeezed a cross pass to Payne who was sitting right in front of the goal. Payne simply tapped the ball in to give the Eagles a 3-2 advantage.

Spain Park got a couple of great looks over the final 14 minutes, just missing on several crosses to Greene right in front of the goal, but none of them found the back of the net. The Eagles gave the knockout punch with 2:26 left on an inbounds pass to Pack. Noticing that the Spain Park defenders weren’t ready when the ball came to her, she sprinted up the field all the way to the goal and pushed the ball past the keeper to give her team the 4-2 win.

With the win Oak Mountain moved to 5-0 in area play and with one game against Huffman left, who they beat 20-0 earlier in the season, it’s almost a formality that they will finish area play perfect.

For Spain Park, things are a little dicier. The Jags are 2-2 in area play with games against Huffman and Mountain Brook remaining. Should they win both they will take second in area and move on to the playoffs. Should they lose to Mountain Brook, however, the Jags will be in a tough tiebreak situation.