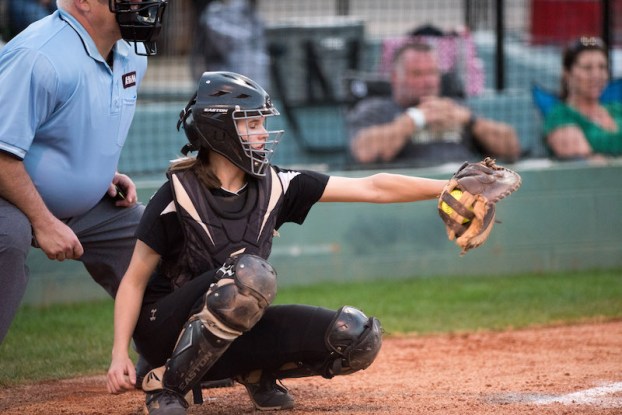 Pelham outhit Mountain Brook 12-8 on its way to a nice 6-4 win over the Spartans. (Reporter photo/Keith McCoy)

PELHAM – It has been an up and down season for the Pelham softball team, but playing in an area with two top-5 teams in Chelsea and Helena, as well as a tough out-of-area schedule, is cause for that. However, with a 6-4 win over Mountain Brook on Tuesday, April 18, the Panthers climbed above .500 as they look to carry some momentum into the area tournament.

Through the first three innings of the game, both teams went toe-to-toe with each other, as the Panthers had an answer for everything the Spartans did.

Mountain Brook struck first in the top of the second with a two-out RBI single from Frances Lyon to center field to take a 1-0 lead.

Pelham, however, answered right back with one swing of the bat in the bottom half of the inning as Sawyer Martin drove a ball over the left field wall for a solo home run to knot things up at 1-1.

In the back-and-forth affair, the Spartans came right back in the top of the third and drove in two more runs with two outs, this time it was off the bat of Turner Cole as she singled to left field to give Mountain Brook a 3-1 advantage.

Before you could even blink, the Panthers were right back at the plate responding to the Spartans’ two-run top half of the inning with a two-run bottom half.

This time Pelham stole a page out of Mountain Brook’s book as the Panthers drove in both runs with two outs. It started with a single from Hannah Murcia before Dalton Merrill and Martin put together back-to-back RBI singles to tie the game yet again.

The fourth inning went by rather quietly, along with the top half of the fifth before Pelham finally branched out and scored without trailing in the bottom of the fifth.

The Panthers started the inning with back-to-back singles from Yoly Paredes and H Helms. After a strikeout during the third at bat, Merrill stepped to the plate and hit a hard ground ball to center field to drive in Paredes to give Pelham its first lead of the night. Using a fielder’s choice and a ground out in their next two at bats, the Panthers were able to put up two more runs to break the game open and take a 6-3 lead.

Mountain Brook tacked on one more run in the top of the sixth to try and put together a response, but were unable to get any closer as Pelham won by the final score of 6-4.

The win moved the Panthers to 13-12 with games against Leeds and Homewood still remaining as they look to continue gathering momentum.

University of Montevallo partnering with Birmingham to co-host NCAA DII National Championships in 2020, 2021

From Staff Reports INDIANAPOLIS, Ind. – The University of Montevallo will partner with the City of Birmingham to co-host the... read more