MONTEVALLO – The University of Montevallo is gearing up to host “Comics of Alabama” on April 21, which explores and exhibits comics by artists and writers from Alabama.

“I think people would be really surprised about the variety of comics we have in Alabama,” said University of Montevallo professor Alex Beringer. “We have people who do underground comics, there are also people who do Japanese Manga and science fiction-based comics, which is hardly something people would expect with Alabama artists.”

Beringer’s students in “Introduction to Comics and Graphic Narratives,”course created the exhibit, which is free and open to the public.

The event is sponsored by the Forte Festival of Creativity and the University of Montevallo’s English Department and honors program.

There will be an opening reception from 4-6 p.m. at Carmichael Library at the University of Montevallo, free food from Eclipse Cafe, a meet and greet with artists, writers and exhibit creators, a round-table discussion with Chris Fason, Chris Garrison, Susan Knowles, Tim Rocks and Beverly Toole about their work and the comics industry, and the virtual reality game “Walking through the Comics.”

While this is the fifth annual event hosted by the University of Montevallo, Beringer said it is the first time the event has featured Alabama-based comics.

“We did not really expect there to be a lot of local comic artists, but we found there is a lot of talent in the state,” Beringer said. “We really wanted to focus on the local artists and their works.”

Beringer admits the comic scene in Alabama is growing, which he attributes to the Internet.

“The whole structure of the comic industry has changed, where you do not have to have a collaborative effort that is strictly based in one central location,” Beringer said. “You can now have a collaboration, which can occur over e-mail.”

For those unable to attend the event on April 21, the exhibit will open for viewing through the second week of May.

For more information about the event, contact Beringer at 665-6452. 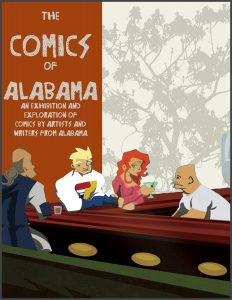 The University of Montevallo is gearing up to host “Comics of Alabama” on April 21, which explores and exhibits comics by artists and writers from Alabama. (Contributed)

By EMILY REED / Special to the Reporter ALABASTER – Throughout his time as a Boy Scout, Thompson High School... read more