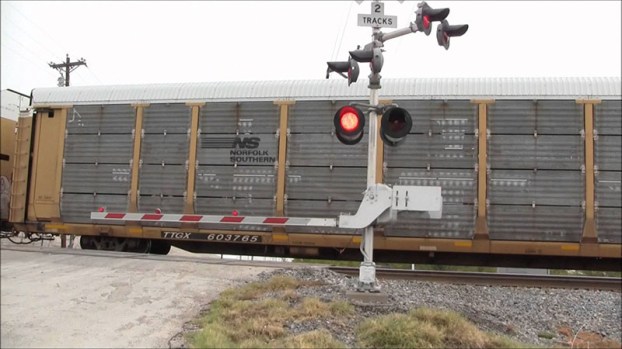 Alabaster leaders said they are closely monitoring a Tuscaloosa ordinance authorizing police officers to ticket train engineers when their trains block crossings for an extended period of time. (File)

Could Alabaster add a train-ticketing ordinance?

ALABASTER – Alabaster leaders said they will keep a close eye on a Tuscaloosa ordinance instructing Tuscaloosa Police Department officers to ticket engineers of trains blocking railroad crossings for an extended period of time before considering a similar ordinance in Alabaster.

Alabaster City Council members discussed the matter during an April 20 work session, and said the matter came to their attention after Tuscaloosa recently began heavily enforcing a 1962 city ordinance prohibiting trains from blocking a crossing for more than five minutes.

According to Tuscaloosa Mayor Walt Maddox, the ordinance instructs TPD officers to issue citations for the train engineers whose trains block city crossings for extended periods of time, and requests state troopers to do the same on state highways.

Alabaster City Attorney Jeff Brumlow said a train blocking a major crossing in Tuscaloosa at last year’s University of Alabama football A-Day game caused significant traffic issues in the city. He said it’s still too early to tell what kind of effect the Tuscaloosa ordinance will have in the city.

“My recommendation would be to see how it plays out in Tuscaloosa before considering a similar ordinance here,” Brumlow said.

Brumlow said the Tuscaloosa train ordinance was originally enacted in the early 1960s, but was superseded by the Federal Railroad Safety Act in 1970.

“That federal act preempts the local ordinances,” Brumlow said. “In 1990, there was a Thorsby v. CSX court case just a little south of us, and the judge basically told Thorsby that they had no legal justification to even pass ordinances like that because of the federal act.”

Brumlow said because trains and railroad property are protected by the federal act, train engineers would be exempt from having to pay any citation issued by a municipality.

Alabaster City Council President Scott Brakefield said the city is in a difficult situation, because residents are frequently affected by blocked crossings in the city, but has no jurisdiction over the railroad companies.

“I wish we could do something, because it’s frustrating,” Brakefield said. “But I don’t think it’s a good utilization of resources to have our police walking up and down train tracks writing tickets they can’t enforce.”

ALABASTER- The Rue 21 store at the Colonial Promenade is one of 14 out of 30 Alabama locations that will... read more