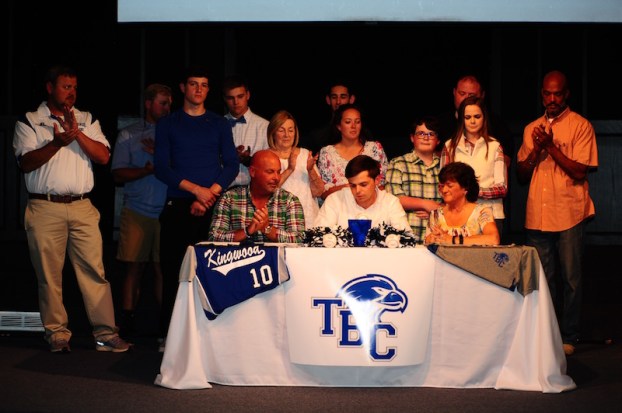 ALABASTER – The Kingwood Christian School baseball team is having a season of historic proportion, and a big reason for that success is none other than team-leader Josh Wright who has dominated both at the plate offensively and defensively behind the plate for the Lions during the 2017 season.

The senior’s impressive season was plenty enough to get him noticed by colleges and on the afternoon of Wednesday, April 19, he signed a scholarship to attend Trinity Baptist College in Jacksonville, Florida where he will continue his playing and academic career.

“This day is very special because this young man has worked his tail off,” Kingwood head coach Jason Picklesimer said. “For some reason we are very blessed with kids like Josh that come in and work their tail off. I can’t even explain how hard this young man works. He completely leads the team.”

Picklesimer went on to say that his leadership shows in several different ways, especially the amount of work he puts in, saying that during practice, Josh always asks for extra baseballs and reps to help perfect his game.

Wright has not only a bright future ahead of him, but has left a mark on the Kingwood program that will transform it for years to come.

“This day kind of helps put Kingwood on the map and gets people looking our direction because they will see that you can be a part of our successful program and go on to play at the next level as well,” Picklesimer said.

While Wright’s talent level has been enough for him to get noticed, the lessons and values he learned at Kingwood are something that gave him a good foundation and helped prepare him for this moment.

“This is just all for the glory of God, he gave me the ability and talent to play college baseball and baseball in general,” Wright said. “It has definitely been a journey, but ever since I came to Kingwood it has felt like home here and had a huge impact on my life.”

That impact on his life will stick with him for a long time not only as he heads off to Trinity, but in his adult life as well, a life he hopes will feature coaching baseball, possibly even at his alma mater.

“Kingwood has created a tremendous memory that I will cherish forever no matter what I go on to do,” Wright said. “If they ever give me a call and want me to come coach then I would drop everything to come back in a heartbeat because coaching college baseball, or really coaching baseball in general, is what I want to do and doing it here would be amazing.”

For the time being, Wright still has the AISA baseball playoffs to participate in as his team has a strong chance to bring home a title after winning their region championship to earn a bye in the first round. After that he will take off to Florida and who knows, maybe a few years from now will be back in Alabaster leading the team and school that has taught him so much.

NORTH SHELBY – Though Caleb Van Geffen has yet to enroll at Vanderbilt University, he is familiar with the school... read more